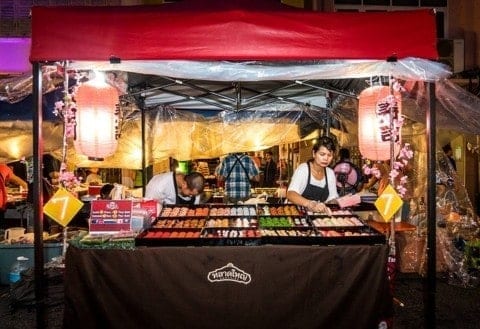 When did they legalize street vending? Despite the contributions of an estimated 50,000 vendors in Los Angeles, it wasn’t until November of 2018 that the city legalize street vending after decriminalizing it in 2016, following Donald Trump’s election. Prior to decriminalization, vendors faced harassment, confiscation and even arrests, putting this often undocumented sector of the informal economy at risk of deportation. In 2013, there were “1,235 vendor arrests, according to a report by the city’s chief legislative analyst”.(Samanta Helou Hernandez)

Street vendors need a permit. To begin with, street vendors are just like anyone else trying to make their money to survive and provide for their family. Street vendors has increased in Oakland and you are able to see them in every neighborhood. Many people will not see the struggles they face but most of them have a fear of the police shutting them down. In the article The Woman Behind Oakland’s Mobile Food Scene by Anelle Bitker,  she interview Otero and stated, “You know we sell fruit in the street, and tamales, and the city comes and takes our food away. The health department, the police, they humiliate us. They they’ll take us to jail if we don’t stop selling, but this is our only way to survive” (Otero). I think this is bad because they earn money everyday and they sell the next day and the police comes and takes their food away and I think that’s bad because they need to survive and get money from your family and they need to know that

Street Vendors by Luis is licensed under a Creative Commons Attribution-ShareAlike 4.0 International License.