Immigrants; Migrating for the Better 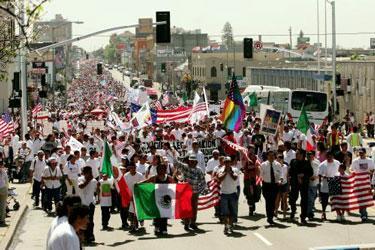 Did you know that about 8.5M people have migrated to the U.S. and about 1.2M of them come here for better job opportunities?  USAFacts has information of different types of reasons why people migrate to the U.S. including wanting to be reunited with their families, wanting to seek better and higher education, wanting to feel safe, and wanting to start a brand new life outside their hometown.  Based on research and interviews, migrating to the U.S. has had a positive impact on their lives because there are better job opportunities for them and it helps shape them and their community into a better place and person.

One reason why migrating to the U.S. has had a positive impact on undocumented people’s lives is because in the U.S. country, they get a variety of well paid jobs.  In an article, written by 3 female editors of the Global Citizen, stated 11 main reasons why undocumented people decide to migrate to the U.S. One of the main important reason why undocumented people come to this country is because they come here to find “jobs and business opportunities” (Nuñez, Sanchez, Sepehr).  Coming to the U.S. has opened many doors for those who are new to the country, are undocumented and come here for job opportunities, a better future for them and their families.  In an interview with Martin, he discussed about one of the most important reasons why he came to the U.S. To look for better and higher opportunities and better job options. He states, “A reason i decided to come here is because there were more job opportunities and support for me and my family.” (Martin).  Martin only wanted the best for his family and wanted to support them in any way possible; that’s why coming to the U.S. and trying to support his family and being able to provide for himself by getting a well paid job that made him be able to strive and become independent.  In another interview with Lucia, she is also an undocumented being who has lived her life working since she was young. She says, “The only reason why I came here to the U.S. is for more job opportunities; a better future for me and my kids” (Lucia). She also mentions that coming to the U.S. might have been one of the best decisions she’s ever made; coming to this country has “allowed me to start a brand new life with loads of opportunities”.  These are the reasons why immigrants coming to the U.S has had a positive impact on their lives is because the U.S. country provides better job opportunities for them to start a whole new and better life.

On the other hand, others may think that immigrants coming to the U.S. hasn’t really made a positive impact on the country and on their lives because it makes them feel opress and become scared.  In an article written by Mary Tamer, the director of marketing and communications at Harvard Graduate School of Edu, she states that “children face barriers because of their parents’ undocumented status, often related to poverty, fears of deportation, and more…” (Tamer).  This is one of the many different obstacles why undocumented children/families are facing throughtout their lives which affects their way of living and going on with their lives.  Nicole Acevedo, an NBC news reporter, “Experts found that in the U.S., deportation fears are having an impact on school attendance, whether students are afraid of their own deportation or of a loved one’s.” (Acevedo).  Acevedo is making a point that because of their fear of being deported, children have stopped attending school because they feel scared to leave their loved ones behind or get their loved ones taken away.  Although this may be true, it is also true that the U.S. gives many job opportunities and different important necessities for undocumented folks. It helps immigrants shape themselves into a better person and help them start a new life.

In conclusion, immigrants migrating to the U.S. has had a positive impact on their lives because there are better job opportunities for them and they help shape both themselves and the community into a better place and person.  People might believe that migrating to this country will create more violence in the community and will turn both Oakland and the U.S. into a violent place. But all these assumptions are wrong. On the contrary, the reason being is because about 1.2M people migrate wanting to look for job opportunities, wanting to be with family, wanting to seek higher and better education, and wanting to be in a safe and united community.  People don’t come here because they want to hurt people or just ‘cause they want to create violence; they migrate here to seek a better and brighter future. Instead of letting each other down with hateful words and deportations, they community should be able to support each other and help each other move forward and have a successful life.

In this interview, Alvarado discussed how she and other folks were obligated to move to this state. There are a variety of different opportunities for lots of undocumented people who want to seek a better future. Coming to the U.S. has had a very wonderful and positive impact on people who’ve migrated here. They’ve said that they feel welcomed and supported and felt apart of the community. This source is credible because Alvarado is an Oakland resident who has lived in Oakland for about 16 years.

In this interview, Lucia mentioned that as a young adult, she has worked in order to provide for herself and her children. But she couldn’t do it in Mexico because it didn’t give her the opportunities she heard the U.S. gives, so she went to the U.S. and started her new life with a lot of job opportunities so that she can be able to provide for herself and her children. This source is credible because Lucia is an Oakland resident who has lived for about 17 years.

Facts, USA. “Why Do People Immigrate to the US.” usafacts.org/reports/immigration. Accessed 17 Dec. 2019.

In this article, it talks about how most of the immigrants come to the U.S. because they want to work here. And other different types of reasons why they come here and not stay at their hometown. This source is credible because it’s supported by Penn Wharton, University of Pennsylvania.

Immigrants; Migrating for the Better by Jennifer is licensed under a Creative Commons Attribution-ShareAlike 4.0 International License.