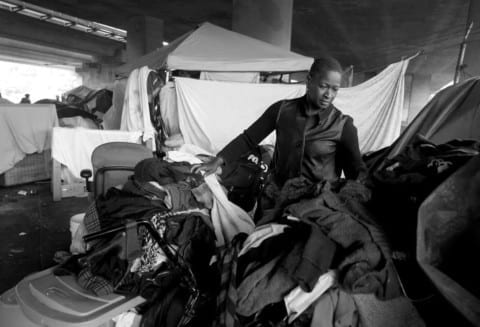 “In the count taken in January using federal guidelines, Oakland had 861 sheltered people and 3,210 unsheltered people, bringing the estimated number of homeless people to 4,071. In 2017, Oakland had 859 sheltered people and 1,902 unsheltered residents, a total of 2,761”(Ravani). These numbers are startling. In a span of two years homelessness in Oakland has increased by a drastic amount. When outsiders come to Oakland what do they see? Lots of homeless Oakland residents, especially now because of how much homelessness has increased by. The amount of unsheltered homeless Oakland residents is also startling, especially the fact that it’s unsafe to be out in the open without shelter. Based on research procured, homelessness has increased by a drastic amount because of the increase in rent, if Oakland builds more tiny homes and provides vacant homes to families then Oakland can decrease the amount of unsheltered homeless people, providing assistance to help them get back on track can decrease the amount of homelessness overall.

Because of the drastic increase of rent in Oakland homelessness has also increased, a solution to fix this problem is building more tiny homes and providing vacant homes to families. To begin, in an article titled “Homeless moms take over vacant West Oakland home” by Adam Brinklow. The article brings up the fact that rent has increased and that has led to more vacant homes in Oakland that can be provided to people in need. Adam Brinklow states ‘‘Moms For Housing organizers call the group ‘a collective of homeless and marginally housed mothers […] with the ultimate goal of reclaiming housing for the community from speculators and profiteers.’ The principals, Dominique Walker, 34, and Sameerah Karim, 41, are Oakland locals who both say they work more than full time but still cannot find an affordable place to live”(Brinklow). A home that’s been vacant and just sitting there for a long time is finally being put to use after two moms took matters into their own hands and put it to use and are going to help other moms. Most homeless people are working full time jobs and housing a decent amount of people in one home will allow them to use their money for groceries and necessities, they’ll be able to save their money and use it wisely. In the article titled “Community group grapples with Oakland Mayor over ‘tiny homes’ for homeless” By Liza Veale. The article brings up the fact that they have built very few tiny homes for homeless people. They are aiming to create a sober community for homeless Oakland residents. Liza Veale tells the reader“About ten volunteers are working on building two new tiny homes; three have already been completed”(Veale). If they can obtain more volunteers to build the tiny homes, than the faster they can move homeless people into the home so they can adapt to the new change of having a home. Once they are moved in they can recieve help with getting back on track. With not much of help they are building the tiny homes slowly, maybe spreading the word about tiny homes and them needing volunteers then maybe they can speed up the process.

In conclusion, homeless people in Oakland deserve a place to stay anything from a tiny home to a vacant home. Providing assistance to help low income people can lower the chances of homelessness in Oakland. Mothers had to take matters into their own hands and use a vacant home, Oakland residents are building tiny homes, residents want assistance to prevent their homelessness.

Image: Shonee Stringer organizes her belongings in her tent in Oakland.
Photo: Paul Chinn, The Chronicle

The article is talking about moms who found shelter in a vacant home. This article is credible because it was published in 2019 and its relevant to my topic because it talks about how women felt shelter.

The article is credible because it was originally posted by Sf chronicle and they publish a lot of articles about Oakland. The article was posted in 2017 so it wasn’t a long time ago and still applies to my topic.

The article was talking about how homelssness has drastically increased in a short amount of time. This article is credible because it was published in 2019 by the SF chronicle and they’ve published tons of articles about the Bay Area.