Does Oakland Really Care For The Homeless?

Home 2019 December 19 Does Oakland Really Care For The Homeless? 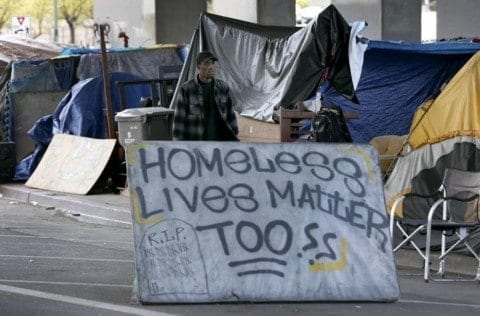 What is Homelessness? Homelessness is the state of having no home including living on the streets, basically having no stable home to live in(Merriam Webster). Clearly, homelessness is an undeniable problem getting normalized everyday by Oakland. “Oakland has increased almost 50%  in homeless people”(Kukura). Joe Kukura author of, “Oakland’s Homeless Population Has Skyrocketed Nearly 50% In Two Years”, an Oakland resident, who writes about problems in the Bay Area, explains how homelessness rates have changed. Homelessness is an unconscious problem in Oakland because it’s rapidly growing without getting assist. Gathering together as a community can be a starting point to help improve with the rapidly growing of homelessness. One can infer Oakland is inadequate in helping the homeless because instead of supporting they are excluded from society and are ignoring the homeless while San Diego is doing an exceeding job at helping the homeless.

First, Oakland is excluding the homeless from society because they are sending them away and leaving them out of the community to perceive unwanted. In fact, In the article, “County offers Oakland jail as homeless shelter for $1 a year”, witten in 2019 by Lisa Fernandez, a KTVU FOX 2 worker, talks about the degrading ways Oakland tries to support the homeless, it states that Oakland has an idea to place homeless people in a closed down prison(Fernandez). Putting homeless people in jail is immensely irresponsible of Oakland because if they are put into jails away from society they could experience isolation. To add on about isolation, emotions can affect homeless people and make them feel unwanted. For example, In a 2018 survey, 62,000 youth were surveyed about emotional issues by Jenco Melissa, who is a professional that studies youth for a living, explained that among homeless youth 42% had high emotional distress, and 9% actually commited suicide(Melissa). As the reader can see homeless youth are extremely stressed out and putting them in jails would only make them more dismal. Not only is this difficult for them but, suicide would only increase in rates knowing they’re seperated from society. In conclusion, Oakland is sending the homeless away making them feel unwanted because Oakland believes jails are better than real shelter. Not only is this horrible but, it can cause foreshadowed problems in the future.

However, Oakland is trying to invest some into homelessness, but it is not enough clearly. For instance, In the article, “‘It’s definitely not getting better:’ Homelessness up 43 percent in Alameda County”, by Merisa Kendall, a writer, who has worked with multiple stations, has made a discovery that Oakland is giving an effort in trying to help the homeless, to explain Oakland has invested 77 million on homelessness and affordable housing(Kendall). This is significant knowing Oakland is giving an endeavor towards the homeless by giving funding to them however, In an interview with Connor Lake, a homeless man that has been living in Oakland for 5 years explained, “While I’m on the streets trying to make a living these house prices keep going up without the government paying attention to us”(Lake). Clearly, Lake is emphatic at Oakland because rent is still going up without getting any resources in return. In sum, although some money goes to the homeless it is still depressing considering some people are still miserable at Oaklands efforts.

Third, though the problem is increasing and Oakland is trying to help, it still can’t overcome this impediment towards the homeless, as other cities are.  Even if Oakland  has invested money, residents still don’t believe in their City in fact, Francisco Hernandez a 50 year old Oakland resident spoke, “Taxes have increased, bills, housing costs, and more. All of this is happening and we  barely get benefited from it. The government can care less”(Hernandez). As everybody can see Oakland is taking peoples money and using it on irrelevant events. However, San Diego is doing a much better job. Additionally, in the article, “San Diego homeless count 2019: Data shows over 8,000 living on county streets or in shelters”, by Jermain Ong, who has written 2509 articles, talked about how San Diego is handling their homelessness, for one, “City of San Diego: 2,600 unsheltered homeless, 2,473 sheltered homeless”(Ong). And, “11 million dollars to help give the homeless, shelter and storage”(Ong). Basically compared to Oakland, San Diego is actually using its money to help the homeless. Comparing both cities everybody will see the truth, while Oakland is increasing in homelessness, San Diego is decreasing. In sum, San Diego is doing a better job at helping the homeless because they are giving shelter and money towards them. Even if San Diego is getting less money they overall are handling their homelessness right by using their money properly.

Finally, One can infer Oakland is inadequate in helping the homeless because instead of supporting they are excluded from society and are ignoring them while San Diego is doing an exceeding job at helping the homeless. Oakland is One, Offering inhumane ways to help the homeless by offering jails which can cause mental problems such as depression. Two, Instead of spending money on  the homeless Oakland is ignoring them by not using the money in an effective way. Three, Oakland compared to San Diego is doing a horrible job at helping the homeless because San Diego actually uses its money to put half of their homeless population in shelters. To add on, In the article, “At $75,560, housing a prisoner in California now costs more than a year at Harvard”, by Mark Buster, a Harvard Graduate, explains how imprisonment is so expensive, to indicate To imprison, 130,000 prisoners it will cost 75,560 for each prisoner(Buster). Now knowing that Oakland is just gonna spend their money on prisoners, it’s the community’s  job to put an impediment to Oaklands horrible ways.

It explains how California is just wasting money on these prisoners who don’t really need it. Basically he explains that the community shouldn’t be wasting so much cash on Prisoners. This is credible because it was written in 2017, only 2 years ago. Also the author is credible because he is a Havard graduate, who writes for a living.

The article talks about jails in Oakland offering jail for homeless people as shelter. Causing outrage because these people want a better life, but instead are being told to go back to jail. This source is credible because it came from a news station, who actually took the time to study this topic and go out to interview people about this topic. Another fine reason is that this was published in 2019 on August which shows this is recent and reliable.

In this interview Francisco talked about the government’s effort of trying to fix the homelessness problem. Hernandez also described how the government takes money from taxes and not waste it back into the community.  Overall he was hugely credible because he’s been living in Oakland since he was 10 and has experienced many obstacles from being homeless to owning a house. He was stable and capable of telling his story.

This was mostly focusing on Homeless youth by surveying them and getting their results. More than 62,000 teenagers answered questions about housing, emotional distress and “developmental assets to get insight. This is credible because it was written in 2018 By Melissa Jenco, who works with American Academy of Pediatrics which focus heavily on youth of any type.

This article basically talked about homelessness in Oakland and how it has changed over time. Specifically focusing on the rates from 2017 to 2019, to show how drastically it grew. This article is excessively credible because it was written about homelessness by an Oakland group, who studies Bay Areas problems. Also it was written in 2017(Recent).

Kendall, Marisa. “’It’s Definitely Not Getting Better:’ Homelessness up 43 Percent in Alameda County.” The Mercury News, The Mercury News, 17 May 2019, https://www.mercurynews.com/2019/05/16/its-definitely-not-getting-better-homelessness-up-43-percent-in-alameda-county/.

This article is not only interesting but accurate because it explains how San Diego is the best city for homeless people. Discovering how San Diego handles its homelessness. Jarmaines article is really credible because it’s from 2019 and is still getting updated. Also it’s relevant to homelessness and was written by an experienced author who is verified.

This has all of the definitions in the world. It has been running since the 1800’s which shows it’s a reliable source, giving accurate definitions for years. Not only is it reliable, but it has been used by several well known authors. Merriam’s dictionary is one of the most famous and reliable sources for  quick definitions, giving the meanings of words.