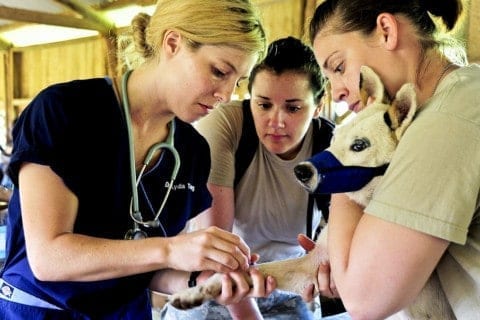 It is no question that medical testing on animals is an unethical process, although at times it has proven incredibly useful to advancing our knowledge. In the article that I annotated, Benjamin Lewis and Christina Lopes proposed and created a solution; association between the animals and the medicines that they are being injected with. Therefore, the solution is that the animals are not being given diseases to treat that they did not previously have, and instead the program finds animals that already have diseases to test on. The One Health Company, originally known as Ethical Animal Research, has worked to connect veterinary hospitals with pharmaceutical clinical trials to cure the animals, while also testing medicine to see if it would be effective on humans suffering from similar diseases.

A clear objection to this program would be questioning the ethicality of testing on animals at all. However, Lewis has created a humane method to test on these animals, which ultimately translates to creating cures to humans with similar diseases all around the world. This being said, founder Benjamin Lewis states, “(This method is) far more predictive, far cheaper, and far more humane.”

This solution, referencing Lewis’ quote above, is cheaper, more predictive, and far more humane than the programs previously in place. Through skipping injecting the animals with artificial diseases, the program saves “millions of dollars, years of work, and hundreds of patients from being unnecessarily treated,” states Jenna Burton from the UC Davis School of Veterinary Medicine.  Further, the results are shocking. “Data on drugs tested on naturally sick animals is proving to be much more accurate when advanced to the human stage,” as Lewis gathered from the direct program results. The program has proven to work, be cost effective, and save not only the lives of animals but in many cases also the lives of humans. I strongly believe that a program like this would work in my community, as it is incredible feasible; all that is truly necessary is a veterinary Hospital and a nearby Pharmaceutical Clinical Trial Program.