College can cost an arm and a leg, but it wasn’t always like this. What happened?

Home 2019 December 4 College can cost an arm and a leg, but it wasn’t always like this. What happened? 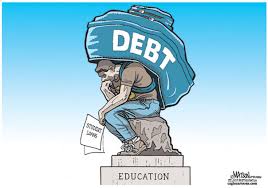 For boomers and many other of the older generations, college tuition is similar to a walk in the park.   But it’s similar for the younger generations, except everything is on fire, because it’s hell. For instance, in the mid 1950s, tuition was affordable, even for the lower middle class.  The University of Chicago cost around $850 per year ($7000 adjusted to inflation), and it was the most expensive school at the time. Now, average tuition is $59,000 per year, with the current most expensive school being Harvey Mudd college, at a whopping $70,000 a year.  So what happened?

Back in the day, most people didn’t go to college, and those who usually worked it off as they went along.  As the years passed, more and more people started going to college. In 1970, approximately 8.5 million went to college, where in 1990 it rocketed up to a staggering 13.8 million.  To keep up with the sudden increase in people going to college, schools started increasing the price to keep up with demand, but it wasn’t anything to extraordinary until about the late 1980s when these prices seemed to skyrocket, and it was starting to cost more to attend schools than it was for the average cost of living.  But the real culprit, was when the government was facing really big budget deficits.  Politicians panicked to put as much of this money as they could towards education, but they couldn’t keep up with it, so to compensate the colleges raise tuition for the mass flow of students into their schools. Which is the reason why college is now through the roof expensive.