The Bullets you Shoot 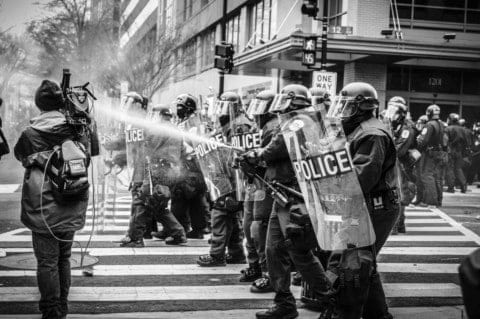 Everyone has a different definition of being American, although many of us can agree that being American is about three main ideas: freedom, equality, and a chance at achieving your dreams. The Hate u Give being American is a much more complicated thing. Here you have a community of people who are discriminated against, poor and live in a crime-filled community because of an endless cycle of discrimination. Since the main characters of the novel are African-American who live in one of the poorest parts of their states, we get to see that the words people associate with being American do not apply to everyone.

One big thing people say when talking about what it means to be American is equality. Yet the novel centers around a young man named Khalil who was killed by a white police officer simply because the officer thought the hairbrush in Khalil’s hand was a gun. A quote that sticks out to me is “Yet I think it’ll change one day. How? I don’t know. When? I definitely don’t know. Why? Because there will always be someone ready to fight. Maybe it’s my turn.” (Thomas, 443). This quote refers to ending police brutality and how it’s Starr’s (the main character of the novel) turn to fix the broken system. The book the Hate u Give is about racism, police brutality, equality, poverty, and other things that are very important to the world and its people today. Police Brutality is a real-life issue, and it’s not the only kind of discrimination so many people face. As I mentioned earlier, poverty is a cycle, and often racial groups take up the majority in low-income communities and receive poor education. “Studies have found that graduation rates are generally associated with positive public safety outcomes and lower crime rates for communities” (Education and Crime). The characters of this novel deal with poverty, poor education, and therefore crime and higher gun rates.

This book is very important to today’s world. African Americans and other minorities are killed at a higher rate than their white counterparts. “According to a study published this week in the Proceedings of the National Academies of Sciences, over the course of a lifetime, black men face a one in 1,000 risk of being killed during an encounter with police, a rate much higher than that of white men” (Santhanam). Therefore, this book is very important for today’s members of the nation. In order to completely be a democratic nation, the people must be able to understand the problems in today’s world and promote the change to fix it. The Hate u Give helps people become less ignorant about what’s happening today and allows those people to make their decision on whether or not to recognize this problem and help promote change.

Overall, however, America is built on being a democracy, therefore, we must at least attempt to learn about what’s happening in this country. “Democratic values support the belief that an orderly society can exist in which freedom is preserved. But order and freedom must be balanced.” (Democratic Values – Liberty, Equality, Justice).  For the world’s news being at the touch of today’s population, we do not make well-informed choices on what to ask for in this country if we do not actually know. If we want to use democracy to achieve the ideals of freedom, equality, and achieving the American Dream, we must make sure everyone gets equal access to their basic rights and that we pay attention to what is happening, and not allow such a large group of people to be mistreated based on their race gender, or sexuality.