Does global warming cause cold weather? 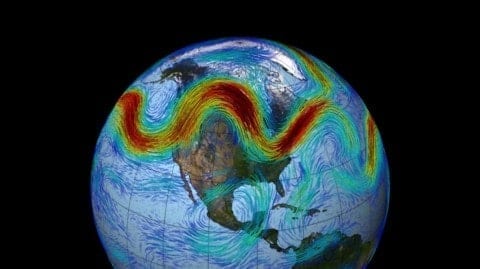 Global warming has been a hot topic discussion for years now and people have regularly debated the effects it will have on the Earth. But if global warming heats up the earth, why is the east coast getting record-breaking low temperatures in October and California is burning? The answer lies within the high moving rivers in the sky called jet streams. According to National Weather Service, jet streams are “relatively narrow bands of strong wind in the upper levels of the atmosphere”. There are two main jet streams in the Northern and Southern Hemisphere, but the Northen Pacific Jet Stream is the one to blame.

The jet stream does not just affect the east but also the west, however, instead of freezing weather it is dry and hot weather. This dry and hot weather is causing the recent fires in parts of California. The storms that are supposed to be hitting the west coast, are now being carried by the jet stream into the north artic, and then blown back into the east coast and the mid-west. In an article by the Washington Post, high winds are created by high and low-pressure areas in the Great Basin. These pressure areas are made when the jet stream carries down the air from the artic. Now, these powerful winds are whirling through California, increasing the rate that fires burn and increasing the power of the fires. In combination with the dry wind and the high winds, the California fires have endless fuel and are nearly impossible to put out.

Global warming does more than just heating up the earth. The increase in temperature means the increase of more extreme weather, even if it is cold weather. Hurricanes and Typhons are also increasing in intensity due to global temperature rise. Even though the east coast is freezing while the west coast is burning, global warming is to blame for these new patterns.