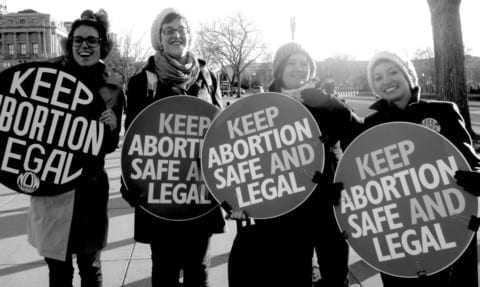 Abortion is an extremely sensitive and highly controversial topic that causes debates, disagreements and rallies all throughout the world. According to the Merriam Webster dictionary, abortion is the deliberate termination of a human pregnancy which is most often performed during the first 28 weeks of pregnancy. A woman may decide to get an abortion for many reasons, whether it be cases of rape, incest, fetus disability, or birthing mortality on either end. There are mainly two sides to this topic: pro-life and pro-choice. A pro-life supporter opposes abortion and supports the belief that it is immoral for a pregnant woman to have the freedom to choose to have an abortion. A pro-choice supporter advocates abortion and believes that a woman should have a choice to have an abortion because she has the right to her own body.

Abortion has been performed for thousands of years and not until the late 1800’s did states start to pass laws making abortion illegal. Nonetheless, women continued to acquire abortions. This was often done through illegal practitioners because up until the 1930’s, getting an abortion was safer than carrying the child to term. “By 1910 all but one state had criminalized abortion except where necessary, in a doctor’s judgment, to save the woman’s life” (National Abortion Federation, 2019). After many years, abortion finally became legal nationally in 1973 with the U.S. Supreme Court decision Roe v. Wade.  The Court held that a “woman’s right to an abortion fell within the right to privacy (recognized in Griswold v. Connecticut) protected by the Fourteenth Amendment. The decision gave a woman total autonomy over the pregnancy during the first trimester and defined different levels of state interest for the second and third trimesters.”

In today’s society, abortion still continues to be one of the most highly controversial topics. Although it is legal throughout the U.S., many states have passed very strict laws making it difficult for a woman to seek and obtain an abortion. In my opinion, a woman should have the right to her body and the right to choose what she does with it. If a woman wants an abortion, she should be able to have access to a safe procedure and be free from discrimination and hatred.

Legalizing Abortion by Madi is licensed under a Creative Commons Attribution-ShareAlike 4.0 International License.