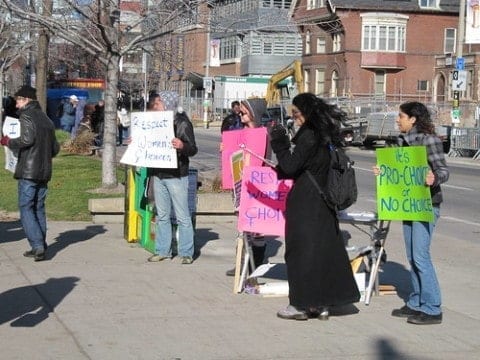 In the first article I read, the title was “Safe and Legal Abortion is a Human Right.” The author is claiming that the woman’s right to choose has support in guarantees of life, autonomy, health, and freedom. First, the author talks about the woman’s right to life and states that this claim doesn’t only apply to the unborn child, but to the mother as well. If she is in a place where having a child could harm her and she isn’t given access to safe abortion, she is more likely to get an abortion in an unsafe environment. The author points out that these unsafe abortions lead to nearly 47,000 maternal deaths per year. The author then points out that women have a right to reproductive self-determination. To support this the author cites “The Human Rights Committee has recognized that denying women access to legal abortion services is an arbitrary interference in their private lives.” She also says that the decision to have a child is the mother’s, and the government should have no role in this important decision.

On the other hand, the next article I read is called “Abortion Violates Human Rights.” The author’s main claim is that abortion is murder, and anyone who supports it cannot claim to care about human rights. The author did a study on organizations that claimed to be human rights organizations and found that only 3 out of the hundreds he researched opposed abortion. About half of the organizations advocated, and the other half had no stance. When analyzing his findings the author says that the people who stand up for the unborn are the real human rights activists.

Each author uses philosophical arguments. While author 1 argues for the woman’s right to reproductive autonomy, author 2 argues for the right to life of the unborn child. The best claim by author 1 was when she stated: “When a pregnancy is unwanted, its continuation can take a heavy toll on a woman’s physical and emotional well-being.” I agree with this because the woman has a right to her body and her decisions regarding her mental, and physical health. If it were cancer, no one would be getting involved and telling her what choices to make going forward with treatment. The best argument from author 2 was when he stated: “abortion is a human rights issue, involving the most basic of all human rights, the right to life.” This argument was successful because he takes abortion away from religion and politics and places it in the category of basic human rights. Although I don’t agree with author 2, I think he makes a valid point when he says that religion and politics divide us on issues instead of bringing us together.