The Pros and Cons of Political Parties

Home 2019 October 27 The Pros and Cons of Political Parties 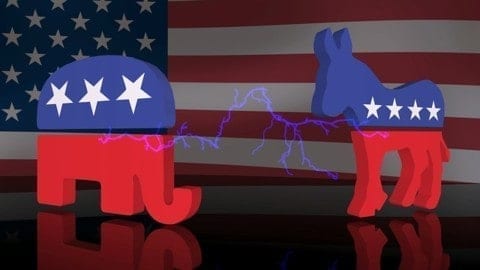 In article one, it tells us about the good qualities political parties have. Parties ensue that corrupt powers can be replaced by effective ones. If you disagree with the morals and values of one candidate, there are other candidates within the same party that you might align better with. Elections take a candidate from each side of the spectrum and allow you to make your choice based on candidate or party, simplifying your choices. Adding to that, Political parties are always talking about government issues, making sure that issues aren’t left behind because of the interest of another party. Candidates and representatives of the party are forced to articulate disparate interests and viewpoints, making sure that the future of the government is well equipped to monitor powers. Political parties need to continue to exist because without them, large groups would not be represented and small individuals voices would not be heard.

Obviously political parties were created with good intentions, but they cause more harm than good. Political Parties have caused a divide in american society for a good reason. Most of the time, only the extreme ends of the party are represented in government, forcing supporters of that party to defend their party representative over the extreme alternative. Without political parties, voters would be forced to make their ballot choices without any bias. They would be forced to look at politicians for what they stand for, rather than who they stand for. The result would be that Americans would focus more on the policy of the candidates and align themselves with the candidate that best suits their views and values. Without Political parties, we would be required as voters to do research on our candidates. This would create a world without labels of a party representing certain ideals. As voters, we should be voting instead for the candidates whose policy and suggestions align best with our own values and goals.

Personally, I originally thought that politics would be better off without political parties. I thought that if they were removed from people’s opinions, people would begin to see candidates for who they really are and make their decisions based off of the candidates policies. Article one said that we would wind up more focused on policy and not base our vote on what party the candidate represents. But after doing more research, the facts in article two made me see both sides a little differently. The most important piece of evidence I found from article two was that candidates and representatives of the party are forced to articulate disparate interests and viewpoints, making sure that the future of the government is well equipped to monitor powers. Without political parties, some issues of government would be left behind and forgotten about. Although I think that political parties are important, I also believe that voters should look past the parties and place their vote for the candidates policies and what they stand for on their own.