The Big Stick and the Auto Worker

Home 2019 October 16 The Big Stick and the Auto Worker 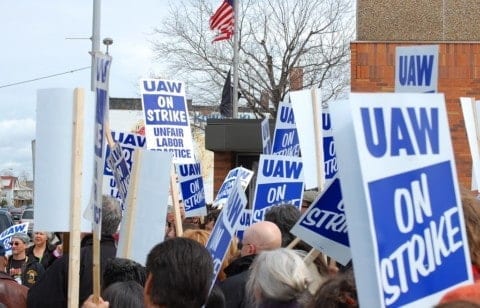 When the constitution was written, our Founding Fathers knew nothing of the change that was going to be brought by the next couple hundred years. America grew into a nation that was one of the first to protect the freedom of people around the world. And although there are many values and cultures that Americans share, our American Creed is to promote equality and freedom at home and around the world. This is supported by past government policies like the Monroe Doctrine, current events like the United Auto Worker Strike, and currently proposed policies like the Equality Act.

Named after President James Monroe, the Monroe Doctrine is “the best known U.S. policy toward the Western Hemisphere” (“Milestone Documents”). Also known as the Big Stick Ideology, the policy comes from President Monroe’s 1823 annual message to congress, where he warned the dominant European powers to not colonize developing nations in North and South America (“Milestone Documents”).

In 1865, the U.S. used the Monroe Doctrine to support Benito Juárez’s revolt against Emperor Maximillian, who was a puppet ruler installed by the French. The Monroe Doctrine was also subtly employed in the Cuban missile crisis when John F. Kennedy used the U.S. Navy and Air Force (along with negotiation) to intimidate the Soviets into backing out of Cuba (“Milestone Documents”). Although these events were in self-interest, both of them helped people in nations with corrupt, or foreign rulers, to gain more freedom, and experience less foreign intervention.

All over the nation, United Auto Worker (or UAW) members have been on strike at GM factories. They are striking for “wages, health care benefits, temporary workers, job security and profit sharing” (Stelloh et al). Temporary workers are being hired by GM to fill spots on short notice, but sometimes working for years with lower pay and worse benefits than a regular employee. This defeats the purpose of a “temporary” employee, and is a major reason why the strikes continue (Stelloh et al). But mostly, “This is about standing up for us, the families and the communities that are affected” (qtd in Stelloh et al). When fifty thousand workers band together for increased rights and opportunities, the nation benefits as a whole. This is a perfect example of our American Creed of equality in modern politics.

Passed by the House of Representatives in May of this year, the Equality Act is a civil rights amendment to other civil rights acts and laws that would make discrimination with respect to “the gender-related identity, appearance, mannerisms, or other gender-related characteristics of an individual, regardless of the individual’s designated sex at birth” (Bachman) illegal under the law. Until the Equality Act is passed by the Senate and the President, it is still completely legal to fire someone or deny them housing because they are gay, transgender, or even pregnant.

Currently, the bill is awaiting a vote in the Senate, but with our current Senate the bill will take a long time to be passed. Kentucky Sen. Mitch McConnell, the Senate majority leader, has decided not to vote on the bill, causing any bipartisan support to grind to a standstill (“The Equality Act Passed the House. Here’s What Happens Next”). However, the bill is still incredibly important for our equality and freedom as Americans, as it protects the rights of everyone regardless of their sexuality or gender.

Some may say that America has never been the freest country because of our past history of slavery, and civil rights transgressions, and to that I would agree. Only when seen through the lens of modernity has America become the paragon of protecting the equality and freedom of those at home and around the world.

Out magazine. “The Equality Act Passed the House. Here’s What Happens Next.” OUT, Out Magazine, 17 May 2019, https://www.out.com/politics/2019/5/17/equality-act-passed-house-heres-what-happens-next.