Flesh and Blood (But Mostly Blood) 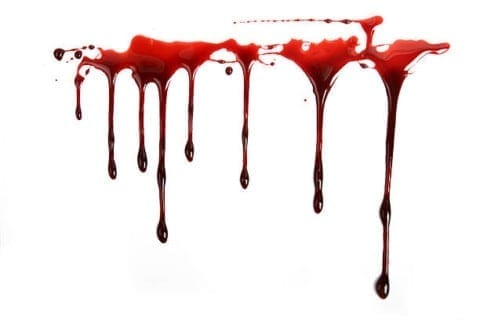 Flesh and Blood (But Mostly Blood)

When I first got my period, everything was fine. There was the standard amount of blood and confusion, and it all went over rather smoothly. As I got the next few, however, the flow started getting heavier and heavier, until I couldn’t make it through a whole school day without bleeding through, and I’d have to perch myself on the bus so that I wouldn’t leave bloodstains on the seat. It was like my period calendar had switched around. I’d bleed for about a month, get maybe a two or three-day break, and then the whole mess would start right back up again. At this point, I thought things couldn’t possibly get any worse.

It did, predictably, get much worse. I started having dizzy spells, I couldn’t sleep well even though I was extremely tired, and I had difficulty concentrating. Things reached a head when one day, I was standing in the bathroom, and a static distortion filled my vision. I was completely blind, and I panicked. I slipped and fell. I tried to get back up, but my vision was still completely obscured, and I fell again. I couldn’t do anything, I was disoriented and frightened. All I was able to do was yell for my parents. After I got out, rested, and recovered my eyesight (which took a minute or two), my parents worriedly suggested that I go to a doctor, which I was all too happy to do.

After a very stressful, tearful blood test and a visit to my doctor, it turned out that my period was, in fact, so heavy that I was anemic. This was, to my surprise and relief, not normal in the slightest, and I was prescribed birth control as a way to regulate my hormones, and save me the trouble of literally bleeding out. Luckily, I’ve now balanced everything out, although there is still the unfortunate side effect of starting my period immediately if I ever forget to take my pills. The situation could have ended much worse, however. I was lucky, I had available resources and doctors who were willing to listen to me. Even if I hadn’t, I would have had Planned Parenthood. Which is why they should not be shut down.

Although it was not directly involved in any way, it makes me wonder about Planned Parenthood. Often, they’re the only ones there to provide help. It also makes me think of the women who need help with feminine health, and the danger that shutting down Planned Parenthood poses to them. It seems that most opposers of them think that all they do is murder innocent babies, but they actually provide care of all kinds. These problems also arise with what hormones are associated with, as the kind I am on is considered birth control, which many may want to make inaccessible. However, cutting people off from these things would only lead to needless endangerment.

The stereotype of Planned Parenthood as an evil center that murders babies is not only completely wrong in every sense, but it also scares people away from getting help. Not only does this worsen the stigma against abortion, but it also endangers people’s lives who could suffer life-threatening injuries by keeping their baby. It may be unfortunate, but the already existing life must be prioritized over the not-quite life of something that hasn’t formed enough to have a brain yet.

The truth is, politicians are pro-life because the fetus is a perfect group to defend – they exist entirely in the theoretical. They aren’t real people yet, they can’t talk back, they can’t have contrasting political views. They’re something you can defend and feel good because there’s nothing “problematic” about them. As soon as they’re out of the womb, their defendants couldn’t give a second thought about them. They’ve served their purpose, now they’re just more potential political fodder.