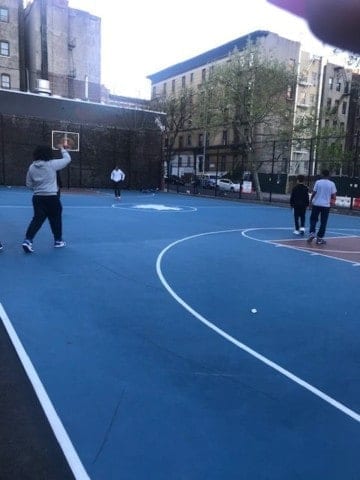 Booker T. Washington Middle School at 108th between Amsterdam & Columbus is a place I grew up, from the age of 6 years old. Booker T. Washington was a place where I went every day after school throughout the school year and in the summertime, we would go on trips and things like that. Booker T. had a lot of opportunity of things to do while being there such as cooking, yoga, basketball, track, football, dance, art classes, and other types of sports.

When I was younger, I use to be apart of the dancing crew and also ran track for a couple of years. I had been there for so long, we all became family. Most of the people I know are from growing up a Booker T. Washington. Booker T. Washington was apart of the “Harlem Children’s Zone” where there are many other after schools like ours, under Harlem children’s zone. Booker T Washington closed down at the end of my 8th grade.

Now I got to another afterschool program that is also under Harlem children zone, still in the same community but different location, different environment, different people also just a whole different type of afterschool. My past afterschool was from pre-K to high school. My current after school is only for high schoolers.

Therefore Booker T will always be a place that will never be forgotten. As a group, we will always be at Booker T Washington Park, watching people play basketball or as the kids that we were on nice days. We would have water fights, barbecues, play football and so many other things that kept us occupied. Even on the cold days, rainy days we will be inside the building cooking, or be in the gym or just doing different type of classes. My childhood will always be a story to tell.