To What Extent Was/Is The Black Panther Party Successful ? 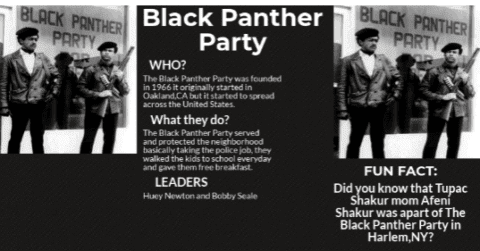 We  Kylynn Williams, and Dekyra Wilson is studying the black panther party. We find this  topic very important because there is still change that needs to be done and we need to find out what they have done that may not have worked or did work so we can know some steps to take to make Chicago a better and safer place.

According to the story “The Black Panther Party For Self-Defense”. The author Adrian Wood and Nutan rajguru members of the activist group called called Black Panther Party published this article on April 17,2014, stating how the BlacK Panther Party Group was a popular activist group back in the 1960’s.According to the Authors,’They were a big help in the community they had free breakfast for children, health clinics, shoes for kids,and they took kids to school.This research proves exactly why we think this topic is important we need to know how groups came into the black communities trying to help or succeeded in helping the community.How would we ever know how to steps that we need to take if we don’t know what was did before us.

In conclusion  we Kylynn Williams and Dekyra Wilson is studying the Black Panther Party and we believe that this topics is very important because kids needed to know what has been up before they were born and brought into the world.We believe that kids need to know the struggle that are ancestors went through in order for us to be where we are today and how we can keep making change today in 2019.