Why are people dying at a young age? 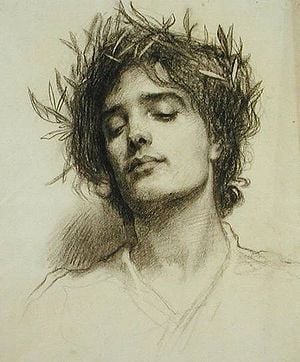 On the surface, Housman’s poem, “To an Athlete Dying Young” is about an athlete dying at a young age. To die young at the peak of your achievements allows your glory and greatness to live on through the memories people have of you. The speaker’s attitude in this poem is very cynical. He praises the dead athlete for dying young because he will be forever glorious

“A gender theory interpretation positions the reader to read closely, and to investigate how the poem’s motif of figurative language, syntax, dramatic irony, and imagery challenge the social construction of gender identity.

My first impression of this poem was confusion. It made me feel sad and happy at the same time. A line that especially evokes the first feeling for me is, “Eyes the shady night has shut / Cannot see the record cut.”  The other feeling–a feeling of happiness–arises when I read the lines, “Today, the road all runners come / Shoulder-high we bring you home / And set you at your threshold down, / Townsman of a stiller town.”  Perhaps this stood out to me because the speaker was talking about the way.

What I know about the situation is that that was talking about an athlete winning something. What I know about the speaker is that he is the kind of person who is nice. This is suggested by the words in the lines “Of lads that wore their hours out, / Runners whom renown outran / And the name died before the man.” The speaker seems to be speaking to anybody that’s reading this, and perhaps to him being a hood type of person. I say this because of the base of the reading I was reading.

The poem is based on the life story of a young winner from a particular culture, and it is a historical moment. The poem revolves around several themes, including justice and survival.

If this poem were a question, the answer would be “The way the athlete is when he outran the other racer.”  If it were an answer, the question would be “What made the athlete a survivor?”

The title suggests that the kid was very young and loved to race, but he got very sick and then bad things went downhill from there. The poem’s form is an epic. This form is a vehicle for the content of the poem.   The poem is very confused but easy at the same time.

“And the name died before the man”.   I think it’s saying his attention and name wore out and died before him the boy himself died physically. That’s a cool line cause he connects two things that are different but similar to each other. The big question that connects with my real life is “Why people dying at a young age in their lifetime?” Young people with a dream always die at a young age and in the text said: “And silence sounds no worse than cheers After earth has stopped the ears.” This quote is like bad news or a sign that is not a good sign. I know because based on the quote I picked from NowComment.