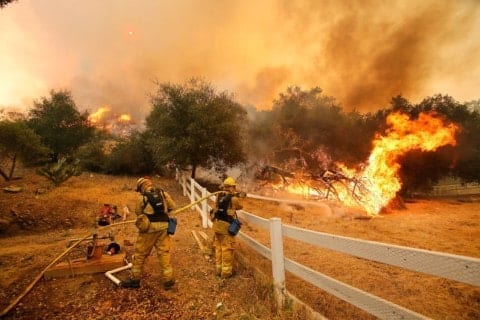 Does climate change impact the severity of wildfires in California? The warnings about climate change and global warming have only just begun, but wildfires spread very quickly and destroy thousands of acres of land. This year the state of California had some of the worst wildfires in recorded history due to droughts and a lack of rainfall.

Wildfires can be extremely difficult to contain. The Santa Ana winds are mostly responsible for the fires spreading across California and destroying land, homes, businesses, and taking lives. Recently the Santa Ana winds have reached consistent speeds of between 60 and 70 miles per hour, an increase of 20 miles per hour. This increase in attributed to human involvement. As wind travels from areas of high pressure, like the cold air sitting east of the Colorado Rockies, to areas of low pressure, like Southern California, the wind slams into the area of low pressure. The intense flow of air into California has directly contributed to the devastating wildfires. As the climate warms, the Santa Ana winds will increase even more in strength and frequency. Therefore, as human activity increases, the temperature of the Earth and the Santa Ana winds will get worse.

Another factor causing wildfires are droughts and dry weather. The drier the land, the easier it is to catch fire and spread. From 2011 to 2016, most of California experienced extreme droughts. Some droughts are due to the areas of high pressure sitting off the west coast of California. During that drought period, there were many days that exceeded 100˚ F and reservoirs rapidly drained. Reservoirs help in adding moisture to the air, but if they drain, the air is drier, allowing wildfires to thrive.

The severity and frequency of wildfires is a direct result of global warming and is made worse by the human population. To reduce catastrophic wildfires, people need to contribute towards the effort of reversing climate change and global warming.

California Wildfires by Mike is licensed under a Creative Commons Attribution-ShareAlike 4.0 International License.