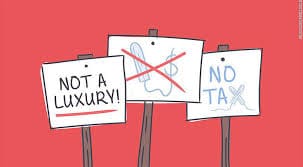 With this project, my group mates and I hoped to raise awareness to an issue that woman all over the world have to face everyday, paying the luxury tax on their menstrual products.

Unfortunately, raising awareness towards this cause was not as successful as my group and I hoped it would be.

It’s clear based on all of the physical evidence, that my group and I’s attempt to raise awareness to this project was unsuccessful. Personally all of my blog posts only had 1 view and it was probably my own. My blog posts also received no comments. It was hard to have success in raising awareness towards a cause that many don’t see as an issue. This fact also affecting the success of out blog posts.

Also, being that my social media only had one follower, who was my best friend, demonstrates the fact that promoting my blog posts and petition on social media had no success.

Last but not least, our petition only got 24 signatures. Demonstrating the fact that many many people feel that luxury tax on menstrual products is an issue. So, my group and I weren’t successful in promoting the issue at all.

Overall, it is evident that my group and I weren’t successful in promoting the cause we hoped to raise awareness towards.

If I had to do it all over again, I would probably the time to promote it on all of my group members social medias including my own to get as many people informed about what it is my group and I were doing. I would also try to find other social outlets to promote my groups cause and hope that someone will see it and be interested. Finally, I would probably post more blog posts so that people will have more information to base a opinion on.