Why Do People Immigrate? 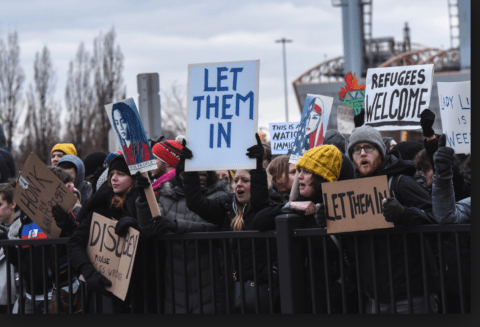 When the assignment of digital activism came up, I didn’t know what to pick. There are so many issue in the world that I wanted to fix. It was so difficult to isolate just one issue. However, immigration was a hot topic during the time. I love immigrants. My parents are immigrants. I go a school where most of the students’ parents are immigrants. I live in New York City, a city founded off of immigrants. It’s such a diverse city and that diversity is beautiful. This diversity is because of immigration. I want to help immigrants since they are around me every day. I wouldn’t want to be separated from my immigrant parents, why should I stand here and let that happen to other families? I sympathize with immigrants since I know that they are all coming here with the intention of simply having a better liufe for them or for their children. That’s something everyone should be able to have.

My video is an attempt to gain sympathy for immigrants. I wanted to show that immigrants don’t always have an easy trip here. They struggle through a lot and often don’t want to leave their home. My video explains reasons why people might need to leave their home in a simple to understand matter. If people learn why immigrants are coming to this country and put themselves in their shoes, maybe there will be more tolerance and respect towards immigrants. It’s not easy to move your whole life; its both emotionally and physically difficult.

My video is an attempt to give a voice to the many immigrants that aren’t being heard and automatically being put into a category for trying to get a better life. It’s supposed to show that immigrants aren’t coming into this country to “steal jobs” or be criminals, they are coming to this country for a chance at life. I would fight for anyone’s chance at life, especially when they’ve done nothing to lose that opportunity to begin with.

If you’d like to see a bigger conversation on immigration check out my blog:

Why Do People Immigrate? by Jana is licensed under a Creative Commons Attribution-ShareAlike 4.0 International License.