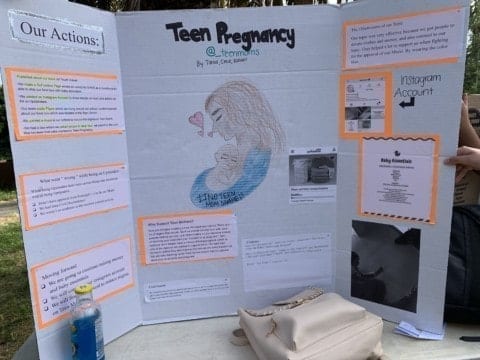 What your project was about / action?

My project was about Teen mothers. Ways we supported them as a team was by making a fund box with baby essentials, which would be shipped to a school in LA called McAlister. McAlister is a school that supports mother who want to finish their education. We also made a GoFundMe page were all the money we raise would pay for the shipment of the box. Then we posted up flyers to spread the word on our fund box and where it was located. We also made a mural to reduce stigma on teen pregnancy. Not everything was as successful, but most of them were.

Back then I didn’t really stand up for anything, if I had to be honest I just heard about things and let it go by. Not that I didn’t care, it’s just I didn’t really know how stand up towards it. But now that I got a topic and had to stand up to it. I learned it takes big responsibility. There are plenty of actions we can do to support others. I just now realized it. A little change can turn into something big. Being an upstander has been hard and fun. Mostly hard because there are certain things you can’t do. And fun because it’s a topic I enjoyed doing since i was interested in it.

As a student I learned that if I raise my voice I will be heard. Heard enough for a change to happen. I also learned that I don’t give up that easily when it comes to something I support and care much about. I will try and fight back till I get my way. Whether it not be exactly how I want it. But in a way where I know I did something to create a change.

What did you learn as an upstander?

From being an Upstander i learned that change takes time. You can’t just make a change right away. I also learned that not everyone is going to agree with you. There are some people that don’t like or understand certain things that you do. And you can either accept the fact that you can’t change their mind, or you can keep convincing them and get them to change their perspective.

Next steps you would like to take as an upstander for this issue or another issue:

As of now, for my topic what I would like to continue is to keep raising baby clothes for people who need it. I think it’s important to give to people to whom its hard to get the exact resources they need. Especially if they aren’t being supported by someone else. Until there comes another topic in which I would want to stand up for, I am just going to continue my topic i got.

Advice to other Upstanders, students looking to create a change:

Some advice I would give you all, to those trying to make a change is keep fighting for what you believe in. Yes not everything you want to do is gonna be possible. But like I say, a little change can make a huge difference.