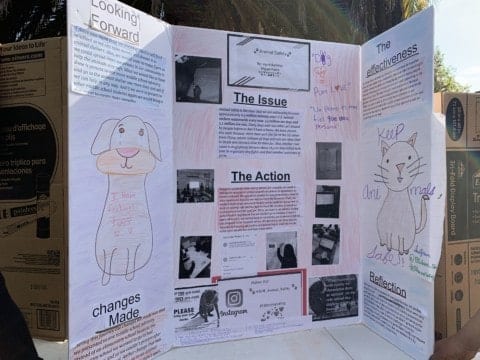 My project was about animal safety which was also connected to animal cruelty because I really love animals and I believe they are as important as us humans because a dog or cat can have more love and strong feelings compared to a person. Also, because I see a lot of stray cats and dogs and people treat them bad and it’s just really sad to me seeing someone hurting an animal that is undefensive also seeing dogs starving in the street but not able to say a single word. The actions me and my teammate  took to raise awareness about this issue is we made an Instagram account account to spread around our actions as upstanders to protect animals. We also drew posters to hang around my school to raise awareness but also we had to email Ms.Bowman who is the school principal. Then, we made 8 slides to go present to middle school students about how to keep an animal safe and we had to email Ms. Goulder to ask if we could present in her class and she said yes. Then, we went to an animal shelter called Rocket Dog Rescue but we couldn’t go in because it wasn’t open. Moreover, we made a proposal letter to Oakland animal shelters and replied back to comments our supporters left on our proposal letter in youth voices.

Being an upstander to me means standing up for an issue that no one notices but keeps happening in our community or do nothing about it when it’s noticeable. Is like taking care of or fixing a broken chair that can’t fix itself because no one helps it and pay attention to its needs. A lot people just walk past by a problem that really damages someone heart and not care about it but their are other who take some time off their time and stand up for other just like my partner and I did.

During this project what i learned about myself is that I love animals way more than I thought I did and they are something that gets me emotional really fast.For example I saw a video about dogs getting skinned alive in china and it made me cry really fast. I was crying my eyes out because I felt so bad and urged to go to china and get those poor animals out of china or make a law where they aren’t food or for fur. Way back I thought something like that didn’t matter much to me but now that I learned more about these animals it’s really tough I wish they could talk to tell humans that they’re being hurt.


What I learned as an upstander was that it takes a lot of actions to get people together and help you fight because other people don’t care and walk over the work you’ve done. I also learned that helping someone who can’t stand for themselves makes my heart feel good and it’s really nice but sometimes can be challenging.

The next steps that I would want to take as an upstander is present to one or more middle school advisories. I would like to do this because I want more people to be more aware of this issue in the community and all around the world. If i was to present to other classes I would bring a cat or dog with me to create more empathy in students. Also, sell food in our school to raise money and donate to animal shelter for the animals in need.   My advice to other students is to choose some very good information to represent the topic they are standing up for. Also make sure you are really passionate about this topic and love the actions you are doing.