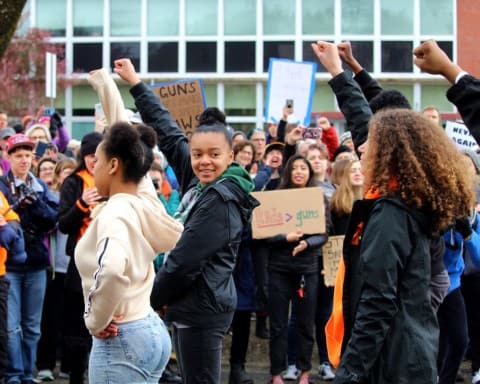 Dear National Rifle Association,
We are writing to your association because you are advocating for more gun rights. This is not good because a lot of universities and high school accidents happen and that is because with more gun rights schools shooting in universities and schools will go up which can be bad because some people who buy guns or other different types of guns probably can use them for something bad like killing someone because they have problems with each other or another different issue. An article on the website Reuters by Gene Emery, who has been published on different websites such as yahoo, MSN, Business insider and many more, he says, “The authors say it’s evidence that firearms – even in the hands of experienced users – are inherently dangerous and accidents don’t just happen among novices.”(Emery). Connecting to the NRA, the NRA association is making the chances of an accident even greater and easier to do.

Throughout the years the issue of gun violence in school has been fought vigorously. One example is from the article titled ¨Students: 1 million expected at anti-gun-violence marches¨ by Jennifer Peltz(an author of many articles of major problems). In this article, it talks about how students respond to gun violence around them and how they decided to go against it. Peltz wrote, “They have led rallies and lobbied lawmakers in Washington and Florida’s capital, Tallahassee. Last Wednesday, tens of thousands of students around the U.S. walked out of their classrooms to demand action on gun violence and school safety”(Peltz). In this quote, there are many examples of tactics of social change such as rallies, political organizing, and strikes. These acts are extremely important because they show that students understand, see the problem that is going on around them, and want to make a change for the better of all of the community. The most important words in this quote are ¨tens of thousands¨. This is extremely important because it shows how many students want this to stop and this does not take into account those who didn’t attend the walkout but supported them. This act of social change was effective because it got people’s attention and gave those who were impacted a bigger voice. Another example of people fighting against gun violence is shown in the article “RAISING THEIR VOICES: COUNCIL PRESIDENT RALLIES SCHOOLS TO DEMAND GUN CONTROL” by Jane Kelly( a writer who writes about schools and politics a great amount). This article talks about how the University of Virginia is being inspired and fighting against gun violence. The article states, “Moved by the March 14 #Enough! National School Walkout to protest government inaction on gun violence in schools, University of Virginia Student Council President Sarah Kenny has mobilized more than 80 schools to sign a letter to President Trump demanding change”(Kelly). The main words in this quote are “80 schools”. These are the main two words because a big amount of schools have come to a consensus and see a way to respond to the problem that many communities may face if this is not stopped. The tactic of social change that is shown in this quote is community organizing and political organizing. This is true because all of those school communities came together and they targeted a major political person who holds a lot of power and is doing nothing about the problem. This action was effective because it got communities together and informed which only brought us one step closer to complete success.
Due to all of these great examples of social change, we will make our own movements around the community. We will start by publishing information on school shootings on our Instagram page. Also, we will make flyers and post them around the school to bring awareness to our topic. Besides these things, we will also make a survey that will ask about people’s opinions on school shootings. The intention of this is to get people thinking more about the subject of school shootings in school before our last movement. Our last movement will be a moment of silence during our advisory class for 2 min to remember those kids who died due to school shootings. This will be followed by another survey about what the students thought while on the moment of silence. This are the actions that we will take. Follow us on Instagram @school_shootings_arent_cool. #gunviolence #standuptoGUNS #Upstander.

This article was about how the University of Virginia is fighting against gun violence and taking a stand. It also talks about how they are taking matters into their own hands and trying to get people of higher stature into their movement. This source is relevant because it shows students taking control and finding ways to bring the community together to make a change, This source is credible because Jane Kelly is a frequent writer of problems in their community. Also, the domain for this website is a .edu.

This article is about how students are planning to march for anti-gun violence and how many people are marching/taking action. It talks about how students are completely done with all this violence that is going on around them and how they really want to do something powerful that will finally put a stop to this. This source is relevant because it shows how youth are fighting back and showing tactics of social change. This source is credible because Jennifer Peltz, the author, is a constant reported for justice and is constantly writing about the community. Also, the domain of this website is a .org.

This article was about gun violence in schools and if we should let teachers have guns in a classroom. This source is credible because it comes from the American health association and they are their to inform us about our topic. Also the source is an .gov.

The article is about what states are doing after the accident that happen in a high school and how has change after that, we can trust the article because its showing what each state has been doing in the past years that the accident happen, we can trust Katharine Q. because she is in a part of a sociation of the moms demand action.

This article was about a study done by students on alfred university on why school shootings occur. This source is credible because it comes from a university and since its a study some of the information is reliable and accurate. Also this site is an .edu and its purpose is to teach and not make money.