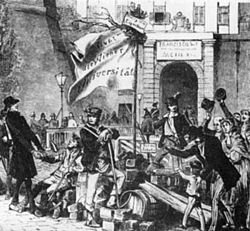 Growth, both meteoric and catastrophic, plagued Europe during the 19th century. Amid the power-grabbing efforts of Russia and a newly united Germany in the latter half of the century, following a turbulent former half caused by Napoleon and the rearranging of empires, culture still found a way to go through enormous permutations. History is rife with strange contradictions and ironies, and the cultural developments of the 19th century are no exception. While major empires were bent on political unification, it seems that all their constituents were really interested in was carving out a more individual identity within the context of their countrymen. While leaders sought to build organized super-cells of nations as a foreboding show of strength to the other monoliths, intellectuals strove to figure out exactly what makes a Finn Finnish, what makes a Norwegian Norwegian. This nationalism was explored through conquering on the part of leaders, and discovered through art on the part of composers, writers, and painters. Nowhere is this more apparent in the work of the Romantic composers of music during the latter half of the 19th century and early 20th century. Their work rediscovered and revitalized folk music across the continent and became a rallying cry for nationalists everywhere and for years to come.
This is especially true of smaller nations that had continuously been persecuted, bullied, and assimilated by the larger empires. This is especially true of the Bohemian nation, a region now designated as the Czech Republic. It was occupied by the Austrians, then united with Slovaks, then annexed by Nazi Germany, and finally won independence following World War II. Before this, it was rudely tossed between kingdoms more or less as a bargaining chip in futile power struggles. Political autonomy and thus the freedom to express Bohemian culture was hard to come by, especially under the long and morally crushing rule of the Habsburgs from the late 17th century to the early 20th. Following the lead of other nations, Czechs tried their strength at a revolt with the Prague uprising. Music was involved in that the eminent composer Bedrich Smetana (1824-1884) actually fought in it. He composed a song named for freedom, which is now universally recognized. His symphonic poem Ma Vlast (The Fatherland) is widely regarded by Czechs as a national statement. Beyond just its artistic merit and incredible ability to capture the form and function of the Czech landscape, it is a statement of national identity for the Czech people. Smetana also composed operas in the Czech language, something more than frowned upon in the German-dominated music world. This is where Antonin Dvorak, another important Czech composer, made incredible strides in his own right. Where Smetana fleshed out a Czech sound that had been ruminating in the works of his predecessors like Zelenka and Dussek, Dvorak took that sound and added to it the optimistic grandeur perfected by giants like Mozart and Beethoven. His ability to siphon the lyricism endemic to folk tunes and add it to large orchestral works defines his mastery as a composer and champion of folk culture. Indeed, this optimism went a long way for the success of his work in wary populations, and his ability to publish his work in Czech with his Christian name. Both he and Smetana are honored today as national heroes in the Czech Republic.

The work of these two composers lives on as some of the most influential for both its artistic merit and incredible cultural influence.

My sources and documents for further reading can be found at this link:https://nowcomment.com/blogs/134395