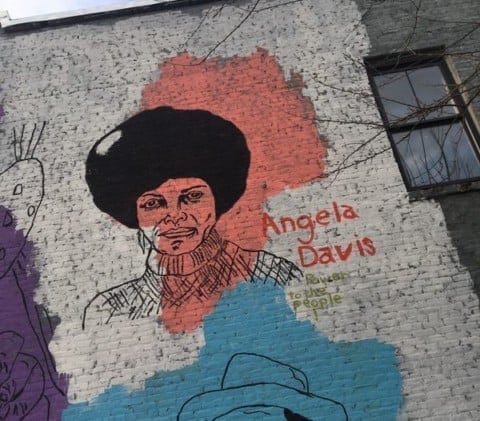 Angela Davis has been a civil rights activist from 1944 to present.  She became known for her involvement in a politically charged murder case in the early 1970s. She was influenced by her segregated upbringing in Birmingham, Alabama. She then joined the Black Panther Party and an all-black branch of the Communist Party as a young woman. She also was a professor at UCLA. Recently Ms.Davis was chosen to receive its Fred Shuttlesworth Human Rights Award, but the civil rights institution cancelled the gala because the members of the holocaust was against Ms. Davis getting the award. Some members of  the Jewish community were against the award because Ms. Davis was openly against what is happening in Israel to the Palestine people.

Angela Davis is fighting for equality for all, I disagree with the civil Rights institute Ms. Davis should get the award. She fought for everyone and is still fighting. According to the about the Palestinian political prisoners video the Israelis  were protesting to get Palestine people out of israel knowing they have nowhere to go. The Israelis should be treating everyone equal, because they should be sensitive towards the palestine situation because of the holocaust. Davis stated “I support Palestinian political prisoners just as I support current political prisoners in the Basque Country, in Catalunya, in India, and in other parts of the world,” she said. “I have indeed expressed opposition to policies and practices of the state of Israel, as I express similar opposition to U.S. support for the Israeli occupation of Palestine and to other discriminatory U.S. policies.”

According to articles from the New York times and CNN the Israelis stated that “ she shouldn’t be awarded because she is for everything  Martin Luther King jr. was against , like non violent tactics.” They say this because Ms. Davis was imprisoned because she was supporting the Soledad Brothers, who killed prison guards and other arrests. Both Israelis and the Black people were enslaved, beaten and killed because of how they looked, the israelis are being hypocritical because they know how it feels to be put in a situation where they have to live in slums and or starve for days not knowing when they would have their next meal.

Some may argue that Ms. Davis shouldn’t have a criminal record for such an award, also because she  believes that violent tactics work one of the things some freedom fighters were against. However she did fight and go to jail for use and she was one of the leading ladies of the black panther movement who gave back to our communities. She shouldn’t be denied an award because she did the right thing and spoke out against injustice that is happening in our world today.

In conclusion Angela Davis should get the award because she dedicated her time and had to endure the pain of seeing our people suffer. She already had a promising job she didn’t have to fight for our right but she still did.  Also she went to jail because of her protest against injustice. She shouldn’t be denied the award because she is openly against injustice all over the world.