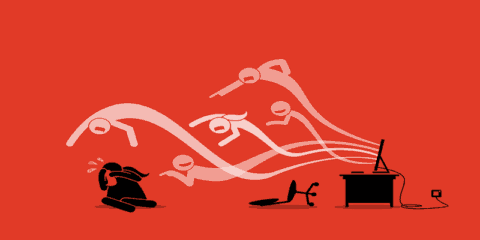 There have been countless incidents of cyberbullying that have occurred over a course of many years. Now we face the question “Should schools be allowed to limit students’ online speech?” I believe schools should be allowed to limit students’ online speech, because it causes disruption in school and impacts the way a teacher manages a classroom, cyberbullying violates our civil rights, and the reality is that this does cause people to commit suicide.

Cyberbullying leads to disruption in a classroom environment and it impacts the way a teacher manages their classroom. In 1968, there was Tinker V. De Moines which was a case where a school did not allow two students to wear armbands protesting the Vietnam War. In Tinker V. De Moines the Supreme Court decided that this wasn’t right thus establishing students’ First Amendment rights in U.S. public schools. J.S.v. Blue Mountain School District is a case where a student created a profile ridiculing her middle school principal so the school punished J.S. with a ten days’ out-of-school suspension. A middle school math teacher at the school experienced disruption in his classroom when a few students were discussing the profile, and he had to tell the students to stop talking but they were disobedient and did not. He had to tell his students to stop talking about various topics about once a week, and it really disrupts his classroom and the way he teaches because he is not being able to properly do so. This is some of the ways that disruption impacts a classroom environment and this is why schools should be allowed to limit students’ speech.

Students’ speech should be limited because cyberbullying is a violation of our civil rights. In a letter written to school administrators, the US Department of Education Office for Civil Rights asserted that “Harrassment creates a hostile environment when the conduct is sufficiently severe, pervasive, or persistent so as to interfere with or limit a student’s ability to participate in or benefit from the services, activities, or opportunities offered by a school.” This is a violation of our civil rights because physical and mental harassment can be harmful, threatening, or humiliating. This supports that schools should be able to limit students’ speech, because it is a school’s responsibility to address harassment incidents about which it knows or should know about.

In conclusion,  schools should be allowed to limit students’ online speech, because it causes disruption in school and impacts the way a teacher manages a classroom, cyberbullying violates our civil rights, and the reality is that this does cause people to commit suicide.