I Stand With Angela 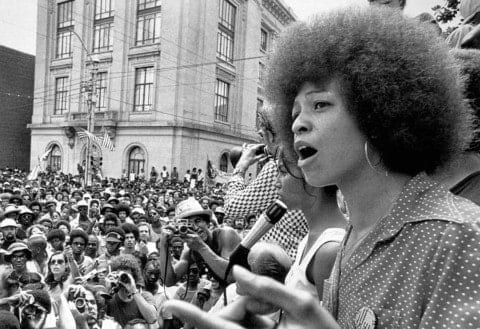 Angela Davis is a American political activist who was a  part of the black panther party that was founded in 1966 and she played a major role during the Civil Rights Movement.  This year Angela Davis was supposed to be given an award for “one of the most globally recognized champions of human rights, giving voice to those who are powerless to speak” by the Birmingham Civil Rights Institute; however the nomination was rescinded. The organization informed her that she actually did not reach the criteria to receive the award and also another organization, Holocaust Education Center, saying that she shouldn’t receive the award because of her support of the Boycott, Divestment,Sanctions (BDS) movement that protests against Israel’s treatment of Palestinians. Angela Davis does deserve the Fred L. Shuttlesworth Human Rights award. Ms.Davis should receive the award because of her involvement during the civil rights movement and also because of the fact that she is still an international activist against injustice this day.

Angela Davis was apart of the Black Panther party during the civil rights movement in the 1960’s and was a very powerful figure during this time.  Angela Davis was a college professor at UCLA and was a strong supporter of the three prison inmates at Soledad prison known as the “Soledad brothers”. Davis was always at protests and giving speeches at rallies to help black people fight for their civil rights. Davis gave a speech called “The Liberation of Our People” on Nov. 12, 1969 at a black panther party to address the Vietnam War and the U.S war machine. Davis insisted that the anti-war movement make the connection between not just national but international domestic forms of oppression and imperialism, she wanted to start a united movement linking this issue. She connected what’s happening in Vietnam to what was happening at that time she gave the speech. During the speech Angela Davis stated,  “I think that demonstrates that if the link-up is not made between what’s happening in Vietnam and what’s happening here we may very well face a period of full-blown fascism very soon.” This statement was very strong and powerful because fascism is a one-party dictatorship and fascist are against democracy, if terror like what was going in Vietnam at the time continues, it will spread into this country and will make it worst for our people. Angela Davis was a motivational and inspirational figure during the civil rights movement as she wasn’t only speaking on issues that was going on in the U.S but also issues that was going on in other countries as well.

Angel Davis was not only an Civil rights activist during the civil rights movement she is also an activist now in present day. Davis hasn’t stopped speaking for what she believes is right at all, she continue doing what she loved which was fighting for people’s rights. Davis has recently spoken on how she supports the Boycott, Divestment, and Sanctions movement (BDS) that protest against Israel’s treatment of Palestinians. According to the article “Angela Davis ‘stunned’ by decision to rescind civil rights award” it says “BDS is a Palestinian-led movement for freedom, justice and equality. BDS upholds the simple principle that Palestinians are entitled to the same rights as the rest of humanity”. As you can see Davis was in support of a movement that she could connect to personally because this is similar to what happen in her country (U.S)  in the 1960s and she was apart of movements to fight for her and her own people ( black, hispanic, working class etc. ) freedom, justice and equality. Angela davis was interviewed at “Democracy now” and she spoke about her position on Palestine and BDS. As the article and interview shows Ms.Davis is more excited than mad for them not giving her, her award. Ms. Davis is actually happy that the conversation on racism and discrimination in other countries is starting to get bigger and she will be glad to help encourage these conversations. According to the interview placed on Jan. 11, 2019 by Democracy Now Angela Davis says “ It’s actually quite exciting to see the issue of Palestinian justice, justice for Palestine, emerge as a topic of popular discourse. We have attempted for so long to encourage a conversation like this. I don’t know whether I enjoy being at the center of the controversy; I think I’ve had my share of controversies in my life. But I’m happy to assist in the process of encouraging more discussion on racism, on anti-Semitism, on justice for Palestine”. As you can see Ms.Davis is someone who deserves this award because of her supports in significant movements that revolve around the topics of racism, discrimination, inequality etc.

Others may say that Angela Davis doesn’t deserve this award because of murder charges she faced in the early 1970s. In the early 1970s Ms.Davis purchased firearms for her own personal safety and gave them to her bodyguards. During Lester Jackson trial for killing a prison guard, he attempted to make an escape and several people in the courtroom were killed because Ms.Davis security started shooting. But since the guns used were purchased under her name, Ms.Davis was then charged with three capital felonies, including a conspiracy to murder but those charges was later dropped. People may believe that somebody who was once involved with murder charges  does not need a award that involve human rights.

In conclusion, Angela Davis needs to receive the Fred L. Shuttlesworth Human Rights award despite the letters and protest the Birmingham Civil Rights Institute received from their local Jewish community. Angela Davis was a very motivational figure during the Civil Rights movement and is still one till this day where she fights for justice no matter what country it is. She deserves this award because of all the effort and hard work she put in as a young Black women in America during a time where young black women were being discriminated.