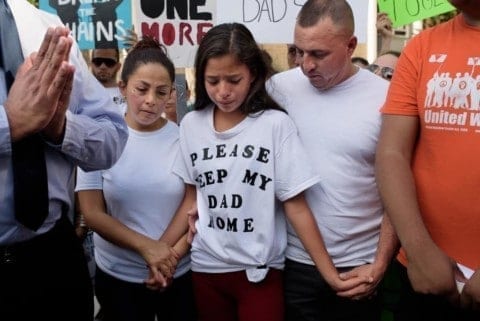 With Trump as our President many U.S. citizens might be being brainwashed about Deportation. For example one might now think that deportation is just a way to “keep citizens of the United States safe.” But in reality all it’s doing is making racist assumptions about people of color and separating families.

Roxana Quintero a Mexican American woman who is also a social worker in the UCSF school of Law Immigration/Deportation defence clinic confirmed this feeling about racial assumption. She is in charge of connecting immigrant families to therapies and overall supplying the needs of the families so that they are ready to go to court. She states, “I would like to change the fact that people are getting criminalized for wanting a better life”(Quintero). This proves that  people who work for deportation are racially making assumptions about people of color and making them feel like criminals for trying to have a better life.

Another reason proving that Deportation is problematic is because of the separation of families. In an Article called Deportation and Family Separation Impact Entire Communities by Jennifer McNulty, a social studies reporter for UC Santa Cruz, she talked about the amount of children who are living without a parent in the United States and stated that “5.9 million children have at least one caregiver who lacks authorization to live in the country”(McNulty). This is obviously an issue because children who need their parents don’t have the privilege of having them and the parents don’t understand the opportunity to watch their to watch their own children grow up. The separation of families has to stop because innocent people who came to this country shouldn’t be torn apart for trying to give their children a better future.

Additionally, not only are parents being taken through deportation, but children also being separated. In the article called , Separated parents given option for voluntary deportation amid child reunification by Tal Kopan, Eli Watkins and Sonia Moghe they talk about how there are still over 1,000 children in custody that are not reunited with their parents and are currently on their own. It states, “The Trump administration put out the release on Saturday night about reunification following the family separations resulting from the “zero-tolerance” policy amid an outcry about the separations and questions about reunification. The release said the Department of Health and Human Services still had 2,053 children in custody not reunited with parents, and the administration plan said reunifications would only take place once the parents’ deportation proceedings were finished.”(Kopan, Watkins and Moghe) This quote is saying that there are still over 2,000 immigrant children who are currently alone and do not have their parents. The only reason that these children will ever get to see their parents again is when their parents deportation proceedings were finished. This is a very traumatic experience for both the parents and the children. The children basically have to get raised alone and the parents have to have the fear that if the procedure never finishes then they will never be able to see their own children.

In conclusion Deportation separates families and makes racist assumptions about people of color. We need our government  to stop criminalizing people of color and to start using their time to find people who could actually be harmful in our communities. Most people who enter this country are only here to supply for their families and are trying to live a better life. Deportation officers need to use their time to find people who are harmful and not just tear apart the families that are only here for a better life.

The interview is about deportation and the stereotypes that people make about hispanic people and why they are deported. This interview is credible because the woman that I interviewed is a social worker for immigrant families and she supplies all the needs that are asked from so that immigrants are prepared for court.

This article talks about children being separated from their families and how we need to reunite these families.

This article is about the separation of families and how not only does separation and deportation affects families but it affects many others as well.