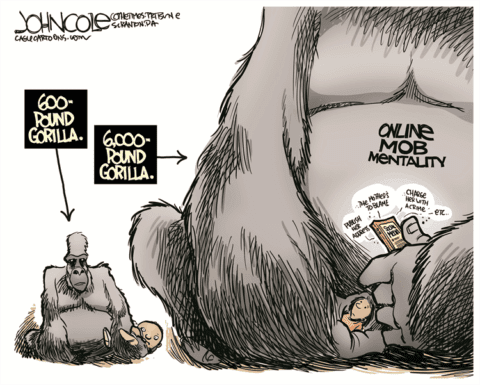 In a world full of problems, one seems to rise to the forefront. The screaming mobs, burning torches, and general hysteria is the most shocking and common image when thinking of mob mentality. This herd mentality can be linked with increases in crime, as people are less likely to say no while partying, but it goes past that. Unfortunately, especially with the rise of social media, mob mentality and the search for a scapegoat is starting to focus on attacking someone’s personal character based on only a few sentences, without any knowledge of who that person is, and rally behind their removal from any positions, with the mob attempting to bully a corporation to give them the pink slip. While this is undoubtedly a problem, the solutions to this are difficult and really comes down to both social media companies shutting down the mobs and corporations being less willing to conform to their demands, both of which are difficult to imagine.

Mob mentality isn’t necessarily a solely online phenomenon. In the Mornington Peninsula in Australia, uncontrollable mobs of “schoolies” have been growing in number recently, and are starting to turn violent. While it’s always been a popular destination for parties, “They’ve gone from being noisy, drunken hoons to violent, noisy drunken hoons”. Drinking has been occuring on beaches in that area for over 50 years, so why is that changing now? It’s because of mob mentality, with people gathering in large places to be a part of something, and it only takes one act of violence, one kicking of a car to get the rest to fall in line and continue the behavior. This herd mentality can be seen online as well as in Australia. This mob mentality has lead to Twitter being called a “Modern-Day Colosseum”. It was the same effect on humans that people saw in Gladiator battles. As the crowds yelled, changes were observed in them. In the name of virtue, they became cruel. The philosopher Seneca once remarked about the spectators “You ask me what I think you should avoid above all else? Crowds of people. … I never come home as good a person as I was when I left. Some defect of mine that I thought I’d settled gets unsettled, some vice that I thought I’d escaped returns.” Aggression, the kind vented on both twitter and in Colosseums, and encouraged by the mob, causes people to lose their humanity. This certainly can’t end well for humanity.

Fixing this isn’t the most complicated of things, but it’s certainly a daunting task. The problem lies on social media, above all else. That’s where this assassination of character, this mob mentality is most felt. “Americans from across the political spectrum can ease up on the character assassination and stop weaponizing mob mentality.”  It’s Twitter and Facebook where they form and it’s their where they thrive.  As a result, it’s up to them to put a stop to it. As a society, if we’re allowed to mob we most likely will. It’s not feasible to go to every single person who’s ever been involved in the rally to attack someone or something and explain why what they’re doing is wrong. They need to be broken up before they can form, and the only ones that can do this are those in charge, those who thrive off of this mob to generate revenue. It will be hard, but the only way to fix this is to show the heads of the areas mobs are allowed to roam free to contain them.