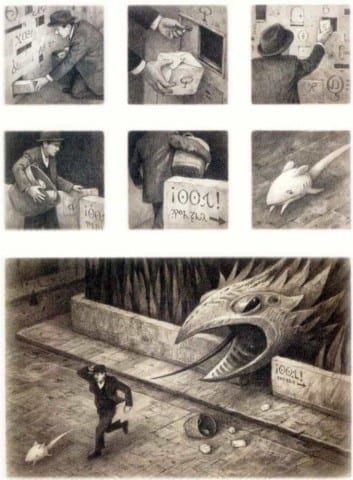 The man wakes up and get ready to go out and look for a job, nobody wanted to give him a job but then he saw a man putting posters in a wall so he convince him to let him do it for money, he was putting all the posters until the man came back and told him that he was doing it wrong, he put it upside down, so he did all of that for nothing, now he saw a woman given a basket with some cubes to people so he went there and woman explain it to him what he gotta do with the cubes, so then when he was doing it he went to a alleyway but he didn’t understand a poster so there was a dragon in the alleyway, the time past and he finally find a job in a factory, a old man approached to him and shared a drink, the old man saw a broken thing and get a flashback when he was young, he was going to war in for his country, he was saying goodbye to a young woman, to go to the war he went to a lot of stuff like walk through the desert, climb mountain and rivers when he was finally in the war there were a lot of dead and he lost a leg but then he went back to his city but it was destroyed, then the old man noticed that is already time to go home so they check out and wait in line so they can get paid, the old man invite the father for a walk, they were in the nature and the old man let free a little animal and the father look up to the sun and was beautiful all the nature, the old man saw some of his friend and they said hello to them and then they starting playing.

The central idea of the fourth paragraph is the struggle to find a job while being an immigrant. The author shows in varies images how the main character struggles to understand the language. For example in an image he shows how the main character puts himself in danger trying to complete a job. These things a told with symbolism. In the chapter the author shows the reader that is hard finding a job while being new to a country.

Shaun tan was born 1974 the nationality he is Australian artist, he won an academy award for then lost thing, other books he has written and illustrated include the red tree and the arrival. Shaun tan has said  his book was to build a kind of empathy in readers. In Australia people don’t it’s like for some of these refugees.

“The arrival is migrant story told as a series of wordless images that might seem to come from a long forgotten time. A Man leaves his wife and child in an impoverished town, seeking better prospects in an unknown country on the other side of a vast ocean. With nothing more than a suitcase and a handful of currency, the immigrant must find, a place to live, food to eat and some kind of gainful employment”. (Wikipedia)

There are many different setting in chapter 4 for example in page 84 we can see how is the city in the new country and different jobs and people working in different places, animals are very different some of them are free they go everywhere they can find the happiness. In page 91 the setting is sad. People seem to be immigrant. In page 99 the setting is depressed, everything is destroyed and it there seem to be a lot of misery.

In page 89  the author uses symbolism to show the struggle of being in a new country. The author chose use a what i’m assuming is a made up that no one understand. In the image we can see the main character go in to a place to deliver something, when he goes inside you can see how he was almost attacked by a big creature. In the front where all the poster were with the weird language were mostly likely a warning to be careful with the big dangerous creature. This creature to me represents the people who are racist towards immigrants just because they do not speak the language.

Chapter 4 is a very revealing chapter of The Arrival. The author shows the reader the struggles someone has when trying to find a job when you’re an immigrant. Shaun Tan uses symbolism in this chapter to show the many different dilemma one might face when trying to live a normal life in a new country. We learned that language is something that disconnect people from others and from having a normal life.