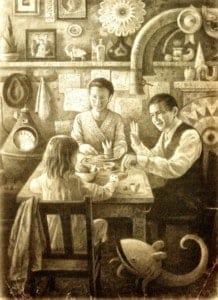 Central idea:  the sixth chapter of the arrival is a very important chapter because helps the reader understand a little bit more about the story from differences points of view. On this chapter we can see differents symbols that help us know what the themes are in the story like for example: the draws, the family picture,  the hat, the origami, the clock between many others. On this chapter we are not focusing on the main character, the father, we are focus on the little girl, his daughter, she found a strange woman that looks like its lost and need her help to find the place that she want to go. In chapter VI of The Arrival by Shaun Tan, the author shows the readers the central idea: people immigrate for differents reasons.

Summary: in this chapter, the story continue with the family sitting on the table eating their breakfast, we can notice that they are having a good conversation and that the father is giving his daughter something on her hand, its looks like the father is explaining something to her about the thing that he gives to her, after that little girl was preparing to go outside by being helped by her pet to change her clothes, when she went outside she saw something similar to clocks but smaller ones. After we see the city where she lives, is different from the place where she used to live before, it has big buildings, statues and streets. The people use to walk with their pets, by the color of the picture give the vibe of a kinda sad place but we know that in the place the “New Home” where she lives now is much better. Then we see the girl playing with two cats accompanied by her pet,  Then she says goodbye to them and goes to look for what her father found and what they were talking about at the beginning of the chapter. Now on the last picture of the chapter the little girl was going back home with the “Strange flowers” that she was looking for, then she saw a lost woman, she looked like she were an immigrant because of the suitcase that she got and her map, she stops the girl and asked her about the location of some place, the little girl helped her.

Setting: There are many different settings in Chapter VI of the arrival. The setting of Chapter VI family, we can see that the family are very happy because they suffered to much but they overcame and live well in the country that they are.