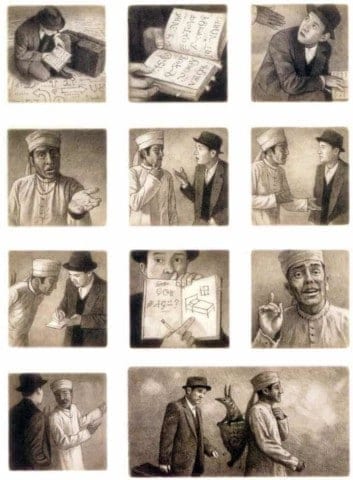 The central idea is that the language is a problem when a person immigrated to another country. The author show us when two people try to talk and use picture to understanding each other. It’s easier show a picture than speak, because if a person speak the language of another country the other person will not understand it. Meanwhile if the person show a picture is easier because photos are universal and communicate messages the everybody understand. The status on this country are a symbol of acceptance, because we see on the book that is two status in the of people, one have a suitcases  and the other no but the interesting is that they stretch his hand and that mean equality. The handshake shows that this country welcomes immigrants.

The setting of chapter ll in the book The Arrival written by Shaun Tan is about the new country that the main character is the father, immigrate. Being thinking about his family every time, but with the pass of the time he realize that he left them for a better future. The first spot of the main character was a city with a huge statue of two people connected by the hand, meaning that all people is welcome, it’s surrounded by water, birds and ships flying away.

The part of check-in and review of health before they go into the country, illustrates the readers a process that every immigrant have to do to live in a country. Language, method of transportation, animals and town.

Chapter ll of The Arrival the author develop a total strange place for the main character, making the language a obstacle to communicate with the other man, but using his intelligence the man, draw symbols to can communicate, arriving to what look like a hotel, the main character see that everything is new for him, but he find out how the thinks works in this place and that’s immigrant people reality, new things and a new culture different from theirs, but always there’s welcoming and kind persons able to help.

Observing the man who has left his family to give him a better future directing a ship with an unknown destination with a sad one for his family, he has to follow the destiny that awaits him and observe the clouds with different figures in a boat full of people Women and the child who wait immediately to arrive, there is a person who writes, but the message arrives that he started the page he wrote and is a figure with it when he realizes that he arrived at his destination. He watched the statues when he was just arriving in the city. Impressed by seeing a statue that represents the immigrant with the people of that city, all are lined up by the ship waiting for their turn to seal their papers to be in the city and come in turn from a person who has his whole body. Stuck with figures and symbols and a photo in the hand of his family are desperate, but the man looks for his document and seals it with a mark. I received your sealed document and left thinking about how difficult it is to see such a big city with strange animals and constructions. He kept thinking and observing the people of the place, he watches his clock and observes the one of the city confused by the figure of the It turns without number only a few strange feet keeps walking but a breeze arrives, it is shaded with the breeze when picking up the hat observes that the street has symbol and figure, seeking for may understand the symbols, he was looking for a place to stay during the night, but he can’t find or read anything, because of the language, but a kind man, get close to him and the language was causing confusion, but then the father used symbols to understand each other and the kind man help him to find a place. The father find the place and with the pass of the night and of the time all what he did is think about his family.

Shaun Tan (born 1974) is an Australian author and illustrator. He is enjoying a hugely successful career, not only as a creator of picture books but as an artist with many different strings to his bow – he collaborates on animated film, musical and theatrical adaptations of his works, as well as producing fine art, for example. Among his twenty or so picture books, his solo works in particular have taken the world by storm.

The Arrival (2006) – a completely wordless work comprising an impressive number of pencil drawings – is Shaun Tan’s most epic tale to date. It is always interesting to learn how Tan’s books come about since, as a personal challenge, he often experiments with new ways of telling his stories. The Arrival was initially a much slimmer book with more text and fewer pictures. However, Tan felt that this was the wrong format for what he wanted to say. Instead, he chose to present the narrative exclusively in pictures. He also chose a rather long-winded approach that involved him building up scenes from the book that he then filmed or photographed before drawing them on the page. It took him five years to complete the book.

The image 27 of the chapter ll of The Arrival represents and shows to the readers the difficult communication between two people, the main character, and a random man from the new country, both of them clearly doesn’t speak the same language, this is a situation that all immigrant people experience when they enter to a new land.

The image illustrate the literary element of the symbolism, it’s an element that seeks to connect people by using images that express differents emotions or intentions and this happening in the image, the main character in a few words, the father is trying to find a place to stay and he doesn’t speak the language so, he used symbols to communicate his message to the other man.

The father is trying so hard to read the language and according to the image maybe he feels so worried that is visible and the man get close to him to ask what happened and they communicate by symbols. Symbolism is an literary element that is related with communication and art, and this is basically the description of this book, communication because the whole book the author is trying to tell us how difficult is the immigration and art the art because both of them express a message.

Immigrants can be relate with the problem of language like the main character because when they don’t speak the language they feel uncomfortable and it’s an obstacle to reach the success in a country.

All the chapters makes the book a masterpiece, because they communicate the message of immigration and the situations of immigrants have during this process. Chapter ll is a crucial part of the book The Arrival. Shaun Tan uses symbols in this chapter to show that immigrant people always have experiences that marks their stance in the country and push people to learn more about the culture. Pull factors are reason that forces people leave their country and seek for a new place, and for a better life. In The Arrival the author illustrate immigration as an opportunity to improve lives and escape from the negativity, overcoming obstacle to reach the happiness.