The Power of Perspective

Home 2018 October 29 The Power of Perspective 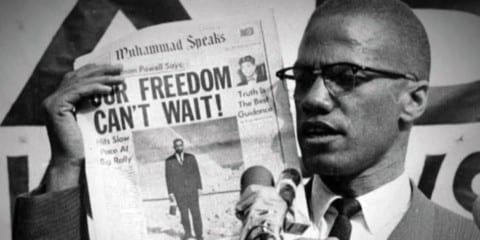 The Power of Perspective

Different perspectives of which a story can cause a person to think and feel in a different way. Also, if America can settle their racial, ethnic, and religious differences and unite, America will be a less hateful and more positive country. My book can be read in two different perspectives. One of the authors is Malcolm X, telling the story about his life. Readers get to see what was really in his heart and his real beliefs and origin of ideas, if not addressed by him orally. Having a story told by the person of subject truly makes the text more significant and trustworthy. It also makes the story more inspiring and affective, as you go into the life of that person from their perspective. “And if I can die having brought ay light, having exposed any meaningful truth that will help to destroy the racist cancer that is malignant in the body of America—then, all the credit is due to Allah. Only the mistakes have been mine” ( X 389). Malcolm X sacrificed his life to accomplish his main goal, civil rights and unity among people. He also expressed how the “American Dream” was possible for some, and impossible for others. People in America have fought for something that they would be willing to die for. In this case, Malcolm X and many other African Americans fought for Civil Rights and freedom in as many ways as they could.

Alex Haley, a famous American author, also contributed to the book. Haley experienced Malcolm X’s thoughts and feelings face to face. “Experiences with Malcolm X had had during a day could flavor his interview mood. The most wistful, tender, anecdotes generally were told on the days when some incident had touched him” (Haley 399). He also was very influenced by the person Malcolm X was. From their time spent together, Alex Haley was able to show the whole world that Malcolm X was truly genuine, even though he was hated by so many. Alex Haley spent countless hours with Malcolm X, analyzing Malcolm X in ways few people could.  “Malcolm X and I reached the point, ultimately, where we shared a mutual camaraderie that, although not it was never verbally expressed, was a warm one. He was for me unquestionably one of the most engaging personalities I had ever met , and for his part, I gathered, I was someone he had learned he could express himself to, with candor,…” (Haley 406). There could have been a possible inclination of other inspired people, because of Haley’s inspiration. Alex Haley and Malcolm X had a strong relationship, which gives the readers more of a reason to trust Haley’s story.

The last perspective regarding the book is the people who have never met Malcolm X.  “Toni Morrison said:  “All paradises, all utopias are designed by who is not there, by the people who are not allowed in.” On reading Malcolm X a door opened. I was allowed in, “ (Sissay). Malcolm X also inspired African Americans to fight against other racial injustices, such as police brutality, “In 1995, the year his own memoir, Dreams from My Father, was published, the future US president said: “I imagine myself following Malcolm’s call. One line in the book stayed with me for he spoke of a wish that he once had. The wish that the white blood that ran through him, there by an act of violence, might somehow be expunged”, (Sissay). America has so many significant people in its past, which is one the reasons why there are so many great people now. Ideas get passed through generations, and one person could be inspired by that idea or person, and do greater things. Malcolm X impacted and influenced me greatly. Malcolm X and The Autobiography of Malcolm X made me want to pursue my passion even more. His mind, power, oratory, and life story influenced me to become a stronger, and more intelligent individual.

One of the most important elements of the novel is Malcolm X changing his ideologies and beliefs after taking a pilgrimage to Mecca, and visiting Africa. Traveling to a place much different than where he lived,  he was able to see this place from a different perspective. He noticed things that were very different from America, and he thought a lot about his teachings and ideologies. From there, his experience on Mecca and Africa resulted in a new perspective on people and America. He realized that not all people of non-color were racist and hateful. As he saw other white Muslims treating others with love and respect in Mecca. “After his epiphany at Mecca, Malcolm X returned to the United States less angry and more optimistic about the prospects for peaceful resolution to America’s race problems. “The true brotherhood I had seen had influenced me to recognize that anger can blind human vision,” he said. “America is the first country … that can actually have a bloodless revolution, “ (Biography.com). He also changed his perception of Martin Luther King Jr. Malcolm X disagreed with Luther King’s peaceful protest at Washington, saying it was a farce. But towards the end of Malcolm X’s life he changed his views on Martin Luther King Jr. “ Near the end of his life, Malcolm changed his mind about King, Dyson says. “He said, ‘You know, you integrationists are much more radical than I had formerly believed”, (Spivey). That acknowledgement, I am sure was very important for the progression of African Americans in the 1960s. The more unity, the more progress is made. Malcolm X also talked and united with other white people in his trip to Mecca, despite having a bold and harsh opinion about them earlier in his life. “He now believed that he could be a partner with non-Muslims and white people in an effort to construct an America and a world free from racial hatred and domination, a message he sought to spread by speaking on numerous college campuses”, ( Khan). The transformation of Malcolm X during his Hajj to Mecca was one of the most important events in his life, according to him. His experience there proves that different races have to come together in order for the world to be a less toxic, and peaceful place.