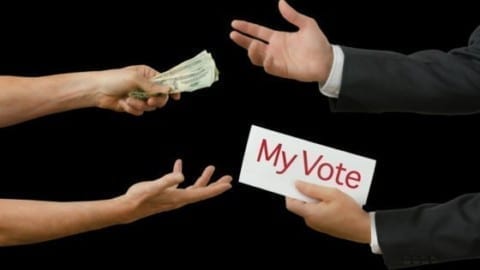 Political corruption, we’ve all heard about it but not everyone knows what it is or the scope of the problem. Political corruption is simply politicians accepting something of value in exchange for pushing laws that unfairly benefit the group that donated that money. But don’t we have laws against that? Well, not really. We only have limits on how much a person or corporation can contribute to a politician’s campaign. For example an individual  or corporation may give $2,700 to a politicians campaign. So how do these politicians get a sum of money big enough to change their opinions? The answer is through a super PAC(political action committee). Super PACs are entities that collect unlimited donations as long as they don’t donate any of the money or coordinate directly with a candidate. This leads to the super PACs collecting money for the politician and buying ads for them. “But didn’t you just say candidates can’t coordinate directly with their super PAC”. Correct, while the candidates cannot coordinate directly with their super pac they often hand the job over to a trusted friend or aid.

My solution to the problem is pretty simple, just get rid of super PACs. While that may sound simple in reality it is going to be pretty hard because we would have to pass a bill through a congress full of people who use super PACs for funding. While ending super PACs won’t end political corruption it will at least make it illegal so if we find politically corrupt politicians we can arrest them.

Why do we need to solve political corruption? Well the answer is a sort of obvious “because its bad” but why do we find it bad. Its part of our american creed to want fair and just laws. An example of this in the poem My Country – Sarah Josepha Buell Hale  she says “And equal laws we all obey- To kings we never bend the knee” This shows that laws should be equal and if laws are made by corrupt politicians they will not be equal to all. Another example of this is in the poem “Patriot Dreams” they say “Be brave; be loyal, and be true.” this shows that an american value is honesty as seen in “be true” and political corruption is not honest. One last example of this is in the poem Let Freedom Ring it says “Our country runs imperfectly;we’re learning as we grow.” I believe this quote is talking about how america has grown corrupt and drifted away from its core values.

Vox. Super PACs and dark money. Super PACs can spend unlimited amounts on elections, but must disclose their donors, Sep 3 2014