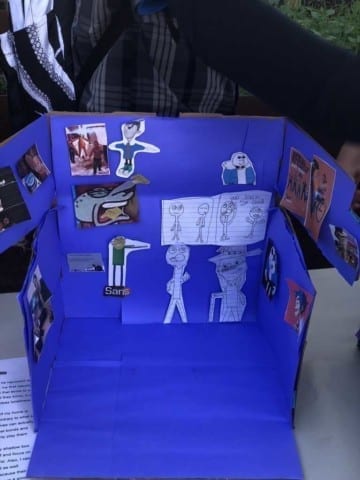 Who is this young man, and what does he represent about himself? Well, I’ll tell you. I am me. To begin, my first identity that I will explain is that I am an introverted person that tends to spend their time either alone or with few people that they know. It might be seen as a way of not being social or only likes loneliness but that isn’t the case.

In fact, a way I socialize at the comfort of my home is gaming. Playing video games specifically. Contrary to what social media and the news might tell you, video games can actually be healthy for people because it can build internet bonds and heighten senses like reaction time. But I mainly play them because they’re fun (most of the time).

Next, I put (mediocre) drawings in/on my shadow box because drawing is a way to express yourself and focus on one task instead of noticing the brutal outside world. Also, I can do draw in like a chair so it’s not very extroverted as well.

Last, but definitely not least is memes because their funny for like at most five seconds and be a way to have a good laugh with the boys.

Most of these can be brought done with dominant narratives (which are negative narratives about the oppressed) like most of these being about depressed aint-social dweebs but for me and many others, that isn’t the case at all. Counter narratives (narratives that counter dominant narratives that are usually told from the oppressed side) would be that drawing and video games are pastimes. Memes are for the laughs. And introverts are just people part of society and would just rather stay at home than be at a club.

In conclusion, I don’t believe people that are “higher” than me because the only person that knows me fully is myself. And that is who I am.