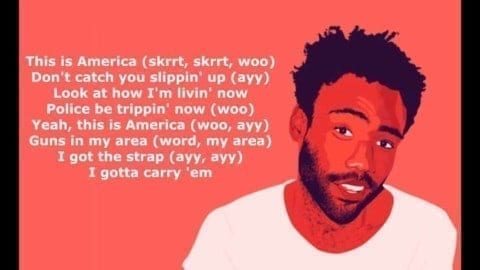 Childish Gambino’s video, “This is America,” is by Donald Glover. He created this music video because he trying to tell society that people back then had issues with slavery and how they had a lot of racism going on back then, and he’s showing us how right now we still have people who are racist and we shouldn’t be quiet about it. The central message in this video is about guns and violence in America and the fact that we deal with them and consume them as part of entertainment. And because of events like the Sutherland Springs church shooting and the Stoneman Douglas High School shooting, violence, especially gun violence, has become part of our national conversation.

Donald Glover’s music video reminds me of something that I made once. One time I had to write an essay about violence and how violence can affect society and even our community. Glover’s music explains every issue that happened or is happening now. He is trying to tell us through his music.

The video ends with the Childish Gambino character running away from a group of white people. I read, ”An Expert’s Take on the Symbolism in Childish Gambino’s Viral ‘This Is America’ Video,” by MAHITA GAJANAN, {May 7, 2018, Time..) One part of the article is saying that he was trying to show what happened back then and how black people are getting persecute even today:

The final moments of the video show Gambino running, terrified, down a long dark hallway away from a group of people as Young Thug sings “You just a Black man in this world / You just a barcode, ayy.” Gambino’s sprint goes back to a long tradition of black Americans having to run to save their lives, according to Ramsey, who says one song dating back to slavery in the 19th century was called “Run N— Run.”

I think that what Gajana said is true because what Gambino was illustrating what happened before and that these things are happening now, like black people getting accused of everything wrong that’s happening in society.

I’m glad Donald Glover made this video. I look forward to seeing what he makes next, because what he did in the video, “This Is America,” is he made me realize that we are going through those things and we just have to pay more attention to it.