Stop the gun violence in schools

Home 2018 May 7 Stop the gun violence in schools 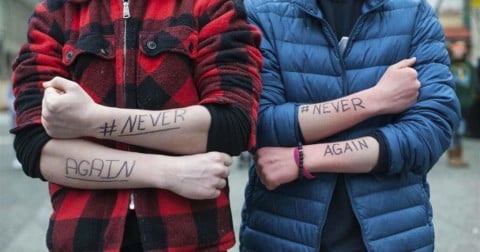 We are choosing to write to you both because we want to make changes against gun violence in schools. Something schools should work more on a school lockdown in which we will practice for a shooting incident. This would be good for everyone because we would all know what we would do when a shooter comes to school. The students are the victims when a shooter comes into a school we need to take action about this and with the support of both it would be helpful. According to other schools they are prepared for school lockdowns when a shooter comes into school. In the article “After Parkland, a push for more school shooting drills” it talks about how the House of Representatives is willing to vote for the stopping of the gun violence and and providing a bill of $50 million grant to schools for training programs. Moreover, Alexia Fernandez Campbell states “The bill would allow schools to use the money for mass shooting drills, which have become common in public schools since the Columbine school massacre. Since the Parkland shooting, a few states have also taken steps to beef up school security” (Campbell). This is saying that with that kind of bill they are able to do better programs to make the school more secure and kids won’t feel unsafe at school anymore. With the support of both we can make Oakland schools more secure with more lockdowns drill. If we have this bill at Oakland OUSD schools this can better protect us and make sure that we are able to be more secure in our community. In this kind of situation we are the targets because we are the ones that are getting attacked by a shooter.

Our project is about the issue on gun violence in schools. Gun violence in schools is an issue because students can get hurt or killed. The cause of gun violence is that some students will bring a weapon because they have a lot going on in school. Our allies would be the school and the teachers, counselors because they can be supportive and talk to  us abouts what’s going on and be prevented to harm others. They will help us by making all students practice lockdowns and how to be safe.The opponents in this situation are the students that bring weapons to school to do bad or to get all their feelings or thoughts out by harming people. Another example is some might also bring a weapon to the school because the person might have a mental illness and needs help. In the article called “Look at the Root cause of Gun Violence” by James Gilligan he is an american psychiatrist that makes books about violence, Gilligan states, “One study concluded that only about 22 percent of those who commit mass murders suffer from sehe article trious mental illnesses” (Gilligan). This quote is trying to say that people that suffer from mental illness it is most likely to go to school and shoot. And because of this we should practice lockdowns so innocent people won’t get affected.

There have been movements in the past to try to make a change for gun violence and one of those changes is Protesting and Walkouts . A movement that happen in February 2018, In the article called “The Parkland survivors started a movement when they took on gun violence. Here’s how it happened” by Alan Gomez, the article talks about how parkland started a movement when the massive shooting happen in their school. Alan states, “They’ve persuaded the GOP-controlled state Legislature to consider gun-control measures once deemed off-limits in Tallahassee and sparked marches, protests and school walkouts around the country”(Gomez). This quote is trying to say that because of what happened in the massive shooting they say that around the country they were getting the support they needed from all over the world. This something that is also happening still now in 2018 and this means that people are still sticking together to make a change.

Our plan is we would have a 20 minutes about Gun Violence in School’s and have more Lock Down Drills because we will make a change and be better prepared when there is a massive shooting at a school and everyone will be safe. The steps we will first confirm with our Principle Aryn Bowman and The one in charged of the OUSD schools Roseann Torres and then make posters about gun violence in schools and have a 20 minutes of silence to bring awareness about this issue that is harming families by losing the ones they love. But we would also be doing minutes of silence in schools to show the support to this situation. We are confident with our plan because it will bring awareness and make a change and feel safe in our community and to not fear to go to school.

In conclusion, gun violence is never expected and no one will ever be able to handle this. So, to prevent this,to raise awareness about gun violence in schools we will let Life Academy’s principal to do more lockdown drills and have the director of Oakland Unified school Roseann Torres make all the OUSD schools do lockdown drills to because it will make an impact out of this and we all together will be prepared and know what to do when theres gun violence in school and won’t have to suffer seeing members die or be impacted by the shooting and be safe going to school.

In this article it talked about how there is was a bill giving to school to use for training programs in case of a shooter coming into school.

This article talks about what are the causes of gun violence and how people are supporting and protesting to stop the gun violence in schools. It also talks about how we should have better school safety.

In this article it was talking about how mental illness can cause to shoot schools.

Stop the gun violence in schools by Erika is licensed under a Creative Commons Attribution-ShareAlike 4.0 International License.