Has Gentrification Affected You?

Home 2018 May 6 Has Gentrification Affected You? 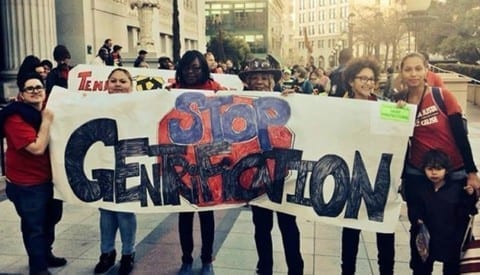 Have you been affected by gentrification? Because we have been affected by gentrification and we care because we don’t want people taking over something that is ours. The issue affects poor people of color who are lower income and are getting kicked out of their house without permission and they can’t stand up for themselves because they don’t have the power to stand up for their rights. Gentrification was caused by people with higher class coming into places like Oakland and taking people’s homes and using their higher class status to lift prices.

The people that benefit from this action are the upper-class people who are mostly Caucasian people. Also, when these people come in, the owners make the place look better so they can raise the rent and the only people that could afford is the people that are higher class. The effects are that people are losing their homes for reasons that they can’t deal with. Also, the people who have lived in this community for so long are thrown away and are sent somewhere where they might not feel comfortable with and might not know as many people as they knew in their old neighborhood. The neighborhood instead gets people who are just there because of the money they have and know nothing about Oakland. The level of oppression is institutional, classism and a little racism because the government doesn’t do anything about it and they know this is happening. This is classism because the people that are being affected by this are the people who are living in poverty and have less money. I don’t think there are allies in this situation not a lot of people pay attention to this and don’t think its a problem but this should be a big deal. The opponents of this are the people who are racist and disrespectful to the people who are not as wealthy as them. This has also happened in the past there were people who made a march and rallies against gentrification. We read an article called “West Oakland, Calif., protests gentrification”, it said, “The Development Without Displacement Research Group held an anti-gentrification march and rally to the City of Oakland Planning Commission meeting at City Hall on June 11 in Oakland, Calif” (Terri Kay). What this is trying to say is that gentrification has been a problem for a long time because the article was posted on June 17, 2014. That was a really long time ago and know it is still a problem because the rent prices have gone up again. So what we what my team and I are trying to do is to stop gentrification in Oakland because there are a lot of people who have been living here for a long time and are getting kicked out of their land which they call home.

Real Life Personal experience: One of our groupmates has had a real life experience, Manny is the name of the person that has experienced gentrification, he used to live in west Oakland in a block of houses that they rented and next door lived all of his family members and everyone built a strong community with each other, he has been living there since he was a child, but one day the owner of all the apartments sent out a letter to everyone saying that they needed to move out because she was going to renovate the place; resulting in her having to raise the price of rent, which led to us to have to move out due to the fact that we could no longer afford her prices. We couldn’t do anything about it so we decided to make a news report about it he called the news people from Univision and told them if we could make a story about this and the people from Univision said yes and we protested and it was on the news but it didn’t work no lawyers wanted to help us so we were forced to leave and all I see to this day is a more middle/higher class community and we had to move all the way to East Oakland and I see less of people of color like it used to be and more of Caucasian people.

Our first step is to have teens from our high school write letters about how Gentrification has affected them and their families. We then talked to Ms. Solomon who works at the library we asked her if we can use the library during lunch so teens can come and make their letters. In order for teens to know where is it going to take place, we are going to make a slide about the letter and send it to Ms. Matsumi so she can add it to the announcements during advisory. The days that we are going to be doing the letter are May 8 and 10 during lunch. After that me and my team are going to send the letters to the Mayor Libby Schaaf. After that my team is going to tweet her and send her some pictures of some of the letters that the students made. If she doesn’t respond back we are going to tweet her again say why doesn’t she answer us.

In conclusion, my team and I believe that gentrification is not good for Oakland because it takes away the home for people who lived here for a long time and for the people of color. If we don’t do anything about gentrification all the people who call home. Do what we need to do Is to stop gentrification and make a change in our community and not letting people with higher income to take over Oakland and making it a better place where wealthy people can live and lower income people that can’t afford to pay the rent and then they will have to leave.

This is a trustful source because it shows that dates from 2002 and they have updated it because I can see that the person or the company has add the rent price for this year. also it only shows the rent price for Oakland and nothing else.

This source is a really good source because there are people who are against gentrification. but then some people are too scared to stand up for themselves because they think that the people in power are going to arrest them or taking too where they come from. So that is why they usually obey if they don’t then there would be consequences.