The issue with net neutrality being revoked is that the normal everyday internet user will have to pay more than usual, and sometimes even more than what they can afford and this will be a big factor in increasing the digital divide. There are people in the world that want more money and with all the prices going up such as rent, buying homes, and gas prices, its increasing difficult for low income families to cope with everything. To elaborate, Nickelsburg explains,“Cantwell is concerned that the absence of net neutrality will be an advantage for big companies that can afford to pay for faster service while smaller startups struggle to get a foothold in the market because their products are delivered to customers more slowly. On Tuesday, thousands of small businesses plan to deliver a letter urging Congress to pass the proposal championed by Cantwell and other Democrats”(Nickelsburg). This shows that small business that can be big will have problems because there is just no benefits to choosing them over bigger companies. This is just taking away job opportunities from small companies that want to start up, that is why net neutrality is a issue more people need to be aware of. 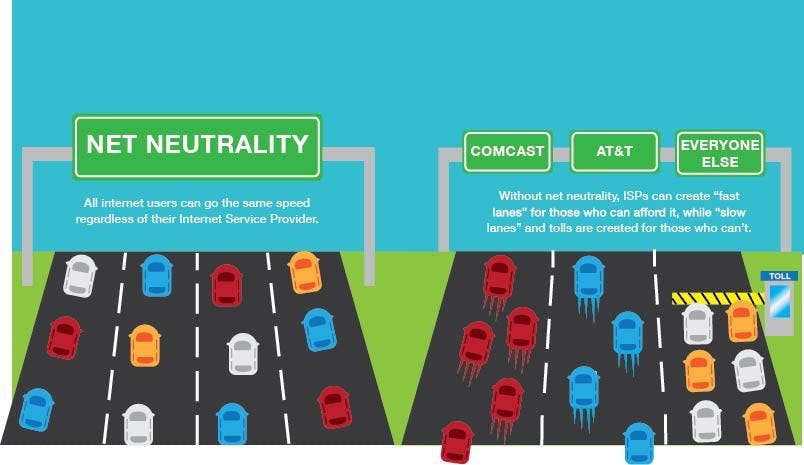 This image visually shows the difference with and without net neutrality, the big internet companies will have the fast internet, and all the rest of us will have slow connection. But with net neutrality, everyone one is on equal footing and speed.

The fight for net neutrality has been huge and there are many allies and opponents, but to those that support net neutrality but feel shy and scared, we just want to tell you that there are many people that will back you up. For example, “The engagement on this issue is absolutely incredible,” Angie Kronenberg, INCOMPAS’s general counsel, said at an event this month on Capitol Hill. “The public is using the CRA to send a message to Congress that this issue is really important to them.” On Tuesday, grass-roots activists held public rallies online and at some lawmakers’ offices, such as that of Sen. Jerry Moran, R-Kan. Contacting congress is one of the best ways to solve net neutrality as they have the power to change the laws for it.” (Fung) This shows that we have allies that are already ready and willing to try and push for change. We have to goto the people who have the power to change the law, which is the government, which is why we came up with out plane to contact congress.

Our plan is to bring awareness to the subject by using propaganda and education by suggesting those who want to fight for net neutrality to bring the issue up to congress and making posters. At our school, our team will hang up flyers and put in the announcements some background about net neutrality, and if they want to join in the fight, go to (https://www.battleforthenet.com/) to contribute.

In Conclusion ,if you care about net neutrality, and want to fight for it, follow our hashtag @ #NetNeutralityRedtoBlue

Fung, Brian. “Inside the Huge, Low-Profile Alliance Fighting to Save the FCC’s Net Neutrality Rules.” The Washington Post, WP Company, 28 Feb. 2018, www.washingtonpost.com/news/the-switch/wp/2018/02/28/the-unusual-alliance-fighting-to-save-net-neutrality-in-congress/?noredirect=on&utm_term=.687f08b0c549. This article talks about what is going on around net neutrality as of currently, what is net neutrality, and who governs the rules that make up net neutrality. The source is trustworthy because the information is pretty much the same as other websites/articles have stated. Additionally, Brian Fung(reporter) has covered business and technology for The Washington Post since 2013. Before joining The Post, he was the technology correspondent for National Journal and an associate editor at the Atlantic. He speaks two dialects of Chinese and is a native of the nation’s capital.

Future, Fight for the. “Net Neutrality Is Not Dead Yet. Call Congress to Overrule the FCC Vote.” Battle for the Net, www.battleforthenet.com/. This websites gives the opportunities for everyone to contact congress, write letters to them, tweet them, and try convince them to vote for net neutrality. This source is trustworthy, because the information that the website gives is verified by other websites.

Lohr, Steve. “Net Neutrality Repeal: What Could Happen and How It Could Affect You.” The New York Times, The New York Times, 21 Nov. 2017, www.nytimes.com/2017/11/21/technology/net-neutrality-repeal-questions.html. This article talks about what would happen to you after net neutrality is removed, and how that would affect different people in different ways. New york times is known for being mostly trustworthy with little bias. Also, the New York Times has won 117 Pulitzer Prizes, they have to be somewhat trustworthy to win so many awards.

Nickelsburg, Monica. “Interview: Sen. Maria Cantwell on the Fight for Net Neutrality, Facebook Hearings and T-Mobile Merger.” GeekWire, GeekWire, 2 May 2018, www.geekwire.com/2018/interview-u-s-sen-maria-cantwell-fight-net-neutrality-facebook-hearings-t-mobiles-sprint-merger/. This source tries to give us the latest news. I personally have used this website multiple times and it hasn’t failed me once. THis website has also agreed with other websites so the evidence is true.

Templeton, Alyssa. “EDITORIAL: Killing Net Neutrality Means Corporate Control of Our Information.” Central Michigan Life, www.cm-life.com/article/2017/11/net-neutrality-editorial. The image shows that every car goes at the same speed with net neutrality, this gives equal access to the internet for whoever uses it. without net neutrality internet access is more strict, internet is much slower for other people with different internet companies.