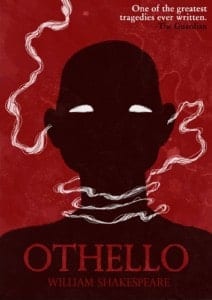 Here you will find two passages from Othello by William Shakespeare and analysis of each paragraph.

To you I am bound for life and education;        upbringing

Analysis: Othello’s marriage is in question to Desdemona. The duke thinks that Othello has bewitched Desdemona. Othello suggests that Desdemona clears this up. Desdemona says the line above, clearing Othello of the charges and emphasizes the love she has for Othello. This paragraph is important because the emphasis of the love Desdemona has for Othello is important later on. When Iago tricks Othello into thinking that she has been unfaithful, Othello ignores times like this and other acts of Desdemona’s love. This sets up the conflict later on in the story and makes the narrative more tragic when Othello accuses Desdemona.

If after every tempest come such calms,          heavy storm

Analysis: Othello arrives at Cyprus after the defeat of the Turkish fleet and sees Desdemona. He says the line above after a short greeting from her. Again, a line like this emphasizes the love the two have for each other. This paragraph is very similar to the last one in that they have a very similar purpose. The difference here is that this paragraph shows a more emotional purpose, and sets up later on the hurt Othello will feel after Desdemona’s “betrayal”.