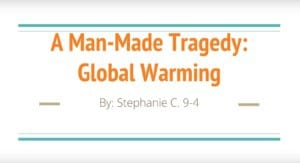 A Man-Made Tragedy: The Impacts of Global Warming

Global warming is the observed rise in the average temperature of the Earth’s surface temperature. Since humans have been on Earth they have taken it for granted and have taken advantage of the fossil fuels it contains. Greenhouse gases are released in excess due to the pollution from burning fossil fuels to produce goods at a cheaper price, trees being cut down to clear land for buildings for human use, and other ways fossil fuels are used for human gain. This makes the Earth significantly warmer as greenhouse-gases get trapped in the atmosphere. The entire Earth is put at risk. Humans and other species are harmed and if no action is taken, the lifestyles of many can be permanently altered or some societies can cease to exist. It is important to help prevent global warming since its effects are irreversible but if people take action to prevent it, it can be controlled. It seems overwhelming due to all of the terrible impacts it has for everything on earth, however if action is taken right away and many become aware of the issue and simple ways they can reduce their negative impact, the humans who caused this problem, can end it. They can become aware of those who support the prevention of climate change and the knowledge they gain from allies and concern they have can turn

into motivation to do better to preserve the Earth.

Before beginning this project I knew multiple facts about global warming and knew how the greenhouse gas effect was directly related to it. I also knew that global warming is irreversible and that many large companies do not care about the issue because they desire a larger profit from their goods and many economies have become dependent on the burning of fossil fuels. After completing the project I had learned that using sustainable and renewable resources to manufacture goods may be more costly but they are better for society in the long run. I had also learned more about many organizations who want to help control climate change and how many focus on a few specific impacts of climate change. I have also learned of simple ways that people can get reduce their carbon-footprint to help the many victims of global warming, especially those who cannot help and are not responsible for humans enhancing the greenhouse effect and thus, are responsible for enhancing global warming.