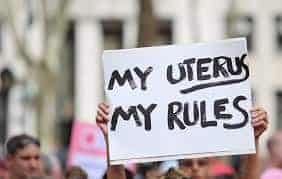 After an extensive survey taken by a wide demographic, I was able to find a general opinion of different populations on the subject of abortion, and also some misconceptions that many people have about the process, the outcomes, and the potential dangers of bringing an unwanted child into the world. After finding that 95.9% of the respondents were born in North America, I had to rule the demographic of “place of origin” out as a factor that could possibly play into the opinions and misconceptions about abortion. The most poignant demographic that I believed would be represented in the survey was the wide range of ages that the questions could possibly have reached: 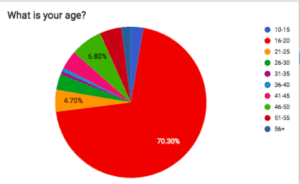 Although a large sum of the respondents were of a common age range, the responses to to each of the survey questions varied greatly. This could have been due to the disparity in religious, cultural, and parental beliefs and influences: 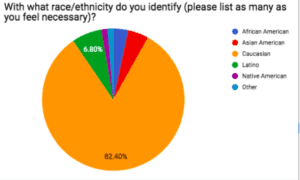 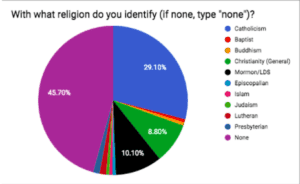 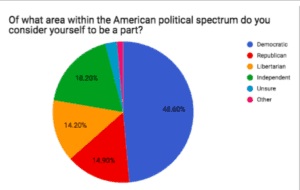 The charts above show a clear depiction of the diversity in the random population of the survey whether it be with regards to religion, ethnicity, or political stance. With these differences, I was able to discover much more than I hoped about common beliefs and misunderstandings surrounding abortion. For example, the most surprisingly misconception I found in my survey was that of the services of Planned Parenthood. A surprising 12.2% of the population was unsure or unwilling to answer the question phrased “Are the only services provided by Planned Parenthood abortions and other reproductive health services?” Though the majority of their business goes toward the betterment of reproductive rights, Planned Parenthood also provides services like mammograms, yearly checkups, and counseling, despite the patient’s access to health insurance or ability to pay.

Another, less surprising result of the study was the general agreement across the board (90.5%) to the statement “Abortion should be an option for those in the case of rape/sexual assault.” According to a large majority of the people asked, pregnancies as a result of attack or non-consensual intercourse are actual mistakes and with other emotional and physical risk factors that could possibly play out in the future of the lives of both mother and embryo, the availability of an alternate choice should not be punishable by law. The question here, of course, is always whether the embryo has legal rights on its own, and therefore whether the embryo contains its own inherent, inviolable personhood. If personhood is amounted to legal rights, than one could argue that an intelligent or highly advanced animal is deserving of legal rights just as any embryo should be. However, the basic rights of pregnant women somewhat overshadow these ideas. These include the basic rights to privacy, self-determination, physical integrity, and to life.

In addition to this extensive data with respect to North America, there are movements all over the world attempting to take action in the area of women’s reproductive rights. In Bolivia, a highly populated country in South America with a continuously growing population, the legislation is closer today than ever in making regulations and more open decisions with regards to reproductive rights in the case of rape and poverty. In my personal study, the results with regards to financial status were not so forgiving:

The difference between the United States and Bolivia, however, is the blatant ignorance, however harsh that may sound, of the poverty currently rampant in the country as of today. In Bolivia, the high poverty rates are one of the government’s top priorities, and are therefore addressed in any manner possible. The legislation enacted also eases the restrictions on abortion in Bolivia in situations of multiple-child births or families, when the mother is a child or teenager, as well as in cases in which the mother is still studying. The move towards this bill was influenced by the growing rates of women coming into clinics in critical condition due to poorly, self-performed abortions.