Whats wrong with the NCAA 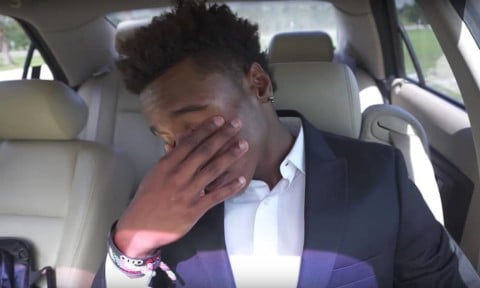 July 31, 2017 is the day when a 20 year old College Athlete was suspended from doing what he loved. Donald De La Haye was the UCF knights Football Special Teams kicker, he played in all 13 games last season as a kickoff specialist at UCF. The Knights posted a 6-7 and reached the AutoNation Cure Bowl one season after posting a winless record. He kicked off 73 times for 4,441 yards, averaging 60.8 yards per kick, and totaled 37 touchbacks. De La Haye also had a YouTube Channel which at the time had about 90,000 subscribers on June 13, 2017. De La Haye now has 551,441 subscribers, but has a total of 55,523,415 views; these are some pretty good numbers for an above average Youtuber that started his channel on June 5, 2015. There is more to the story of De La Haye views, dozens of his videos have gone viral with the most views being at 1.7 Million. His Youtube channel is one of the more popular channels run by a athlete, but thats where our problem begins, De La Haye at the time played for a ” D1 College” which has NCAA rules, rules of not allowing any of there athletes to be self employed or make money from there sport.

The NCAA rulebook: NCAA bylaw 12.4.4 addresses athlete self-employment. The rule states an athlete “may establish his or her own business, provided the student-athlete’s name, photograph, appearance or athletics reputation are not used to promote the business.”. The NCAA does this in order to level out the playing field in order to make entrepreneurship “equal” for students that play sports at a collegiate level and those who don’t. Alot of controversy surrounds this topic because a lot of the athletes have schooling, housing and food to pay for-when they unallowed to make money through the sport to play it turns into a double standard; the NCAA and the College are able to make money off these players performance through ticket sales and merchandise, but the athlete can’t make a cent off the sport(unless they go pro)-this includes sponsorships or illegal vending of money. De La Haye situation is a huge controversy in particular because the school gave him a ” Scholarship” which paid for all schooling-with his youtube channel he truthfully not making that much money through YouTubes Add Revenue (which was created in 2013). De La Haye videos would only make money at 10,000 views, with each paycheck from YouTube, he was reported to send a large portion of his money back home to his parents. With the De La Hayes eligibility being in jeopardy to play with the UCF Knights, he had the Coaches and YouTube community full support; the coach were just hoping De La Haye and the NCAA would come to terms, but the NCAA options were allowing De La Haye maintain his eligibility and continue to monetize videos that did not reference his status as a student-athlete or depict his football skill or ability. The waiver also allowed him to create videos that referenced his status as a student-athlete or depict his football skill or ability if they were posted to a non-monetized account.

The end result of Donald De La Haye decision was to leave the UCF Knights Football Team, rejecting his “Scholarship” from the school, in order to purist what he loves-making entertainment for an audience. His Youtube Career Ironically took off after the whole crisis and since then he averages about 150k views per video. He has also recently decided to sue the NCAA over his Scholarship. In good news he has also recently decided to sign with “Whistle Sports” in order to collaborate with other YouTubers that create sports clips, entertainment, trick shots, skits etc.  I personally like his YouTube channel “Deestroying“, he is a real raised young kid that means so well, all he just wants to do is live freely and create content that others enjoy

Tweet shows after he was suspended for not following NCAA regulation