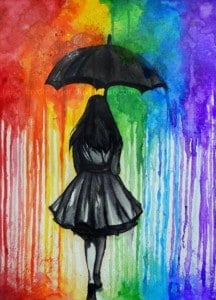 Discrimination Against The LGBTQ community

Discrimination against the  LGBTQ community

Did you know that “80% of gay and lesbian youth report severe social isolation.”(11 facts about LGBTQ life in America) Based on interviews and research it is clear that without support coming out can be a challenge for LGBTQ youth but when supported coming out can be empowering.

Firstly, if not supported coming out can be traumatic for LGBTQ youth and can lead to depression. This is important because the reason to why so many LGBTQ youth experience severe isolation is because they are being discriminated by their own peers and community members. I had the pleasure of going around and getting peoples personal opinion. I came across Oakland community members. We talked about the ways the LGBTQ community has been discriminated and what might be the cause for so many LGBTQ members to feel isolated and encapsulated. My interviewees name is Berenice Gutierrez, She stated, “I believe that from what I know, Oakland isn’t the safest place for LGBTQ community members to be because a lot of people when seeing LGBTQ members just being themselves they tend to judge quickly. I have seen cases in which LGBTQ members have been verbally and physically abused. I believe that this mistreatment is unfair because they have not brought any harm to the community” (Gutierrez). This matters because this mistreatment has caused emotional harm to the LGBTQ community. I would have to strongly agree with her statement, the LGBTQ community is not at fault for the abuse that they receive they just want to express who they believe they are. This supports my assertion about how coming out can become a challenge, the LGBTQ community is a really oppressed group and so much negative attention has been brought to them. This can cause them to feel ashamed of coming out and figure out what their likings are. Another example comes from the writer Dominique Mosbergen. She wrote an article about the LGBTQ community and asexual community. She collected people’s opinion on the LGBTQ community accepting Asexual people. Something that caught my eye was when one of the people mentioned in the article by the name of David Jay stated, “Gay people have really had it the hardest of all. From verbal abuse to being killed, they’ve been put under so much fire for expressing their sexuality. They’ve suffered a lot, they’ve paved the way”(Jay).The reason I chose to add this was because this proves that LGBTQ members have been oppressed for a long time and are forced to deal with the mistreatment. This supports my claim because it shows how a person who identifies as LGBTQ are disrespected and have had to cope on their own.

However, when supported the coming out experience can be positive. With the help of our community we can create a safe place. When it comes to coming out, members of the LGBTQ community may feel ashamed or scared of saying anything. I believe that as a community we can work to create a safe place for them to be able to express who they want to be without being labeled with so many different disrespectful assumptions.I have stated the struggles that make coming out a challenge. This is information has come from my personal opinion and sources that have helped me prove the oppression against the LGBTQ community. But I strongly believe that coming out can become an enlightening experience. Some may say that the LGBTQ community just want attention and that they have the support that they need. Although this mindset is not positive, I would still have to agree that Oakland has become a better and more supportive community. I believe that it all comes down to what part of Oakland LGBTQ members live in. Not many places are supportive of those who are involved with the LGBTQ community sometimes they might be considered homophobic.( Being  homophobic means that a person show dislike towards or don’t accept homosexual people). As I was initially stating I believe Oakland can be a supportive place. I want to introduce another interviewee her name is Victoria Tran. She is one close friend of mine who supports the LGBTQ community. As the other interview I asked for her thoughts on the LGBTQ community and if Oakland was a safe place for them to be. Tran stated, “ That depends on what part of Oakland they are in. But Oakland has become very supportive of the LGBTQ community. There is still bullying so not everything is sunshine and rainbows here but there will always be someone who will give support of a member of the LGBTQ community in need”(Tran). This is significant because just as I said, yes there is discrimination and LGBTQ members get stigmatized but when supporters take the time to help out these members it can make things easier for those who struggle coming out. This also proves that Oakland can be a safe place and can be a place where people can stay and count on somebody. This is important because if members are being supported it can help them get rid of their negative mindset and it can help them get over that pessimism some people might carry. Another piece of evidence comes from an article titled “Oakland opens first LGBTQ community center” in this article is information about as it is said in the title the opening of a new community center for LGBTQ youth in Oakland. Volunteers for this community center are planning on getting donations tobe able to help the LGBTQ community. One of the volunteers by the name of Jeff Myers stated, “This is a big moment for us!.Having a central space is critical, not just to come together, but a place to find support and resources during times of crisis” (Myers).This is important because Oakland has now created a safe place for LGBTQ members in need. This proves that Oakland has changed and it can be the supportive and caring community it should be. With this type of help members can finally come out of their shell and positively come out. As a member of the LGBTQ community myself I believe that this change will be great for not only the LGBTQ community on its own but the Oakland community as a whole.

This article gives out information about suicide among the LGBTQ community. I believe this is a credible source because this information is to give out awareness about the percentages on the feelings of LGBTQ members. this is a project you can join if you are a member of the LGBTQ community and are in need the article made sure to cite the info they have gave out as well.

In this article the author collected Info and opinions from different people about the LGBTQ community accepting Asexual members. Some of what was written in this article caught my attention and most statements were relevant. This source is credible because it doesn’t just include one persons opinion and it was recently updated which tells me that the author has brought in new ideas .

This article shared information about the First community center for LGBTQ folks in Oakland. This source is credible because it is a source so that LGBTQ members are aware of this new center that they now have access to. The makers of the now community center are making sure that the LGBTQ community have a safe place to go to when in crisis.