Feed the Hungry not the Streets

Home 2018 January 19 Feed the Hungry not the Streets 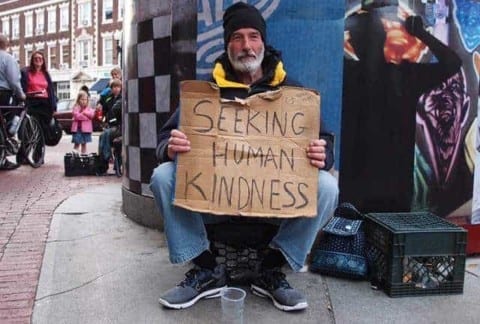 Awareness for the homeless

“The estimated number of people on streets and in shelters in 2015 was 4,040, and now it’s up to 5,629” (Katayama). This quote matters because it’s saying how the numbers in the homeless community is growing. It’s also explaining how fast the number of homeless people is increasing because people keep getting pushed out of their homes because there not able to keep up with the rent. Do you ever find yourself wondering why so much of our Oakland community is wrapped around homelessness? If so stick around and you’ll find some answers.  Most of our community is homeless; The reason that I chose to write about the homeless community is because it’s an issue that sometimes goes without attention. People don’t understand the severity of this.  When a community is in jeopardy of having more homeless people on  the streets and with no home, people should be aware of what is happening and why it’s happening so that they can help stop hunger. There are many reasons why people end up being homeless. It can be because of drugs or gentrification, but whatever may be the reason people shouldn’t be left without a home or food.

Now if you read the title you are probably asking yourself how do drug wars relate to homelessness? Drug wars relate to homelessness because drugs have a very big impact on a person’s life because they are addicted to the feeling without caring what it does to their lives. Some people are so addicted to drugs that they spend most of their money on drugs when that money should’ve gone to their rent and bills. This is not entirely the person’s fault because addiction can be the result of self-medication due to trauma or undiagnosed mental illnesses. They are addicted and cannot just end the addiction with saying enough until they go to a rehabilitation center and most of the time rehabilitation centers cost a lot of money. People don’t have that much money to go into a rehabilitation center so a lot of the time they choose to stay on drugs until the point where they cannot keep up with their rent that they are forced to live in the streets. Now we just got started on talking about drugs but what about drug wars? Drug wars can also have a huge impact on making you homeless. The article states that drugs are one of the reasons why people become homeless and the quote says, “Substance abuse is often a cause of homelessness.  Addictive disorders disrupt relationships with family and friends and often cause people to lose their jobs.  For people who are already struggling to pay their bills, the onset or exacerbation of an addiction may cause them to lose their housing”(National Coalition for the Homeless). This quote matters because its saying how drugs can really affect a lot of things in your life and can lead to homelessness. In the quote it says that people end up losing their jobs because they are so caught up in drugs that sooner or later drugs is all they know and care about. People should be getting help but like I’ve said before sometimes it difficult for drug addicts to ask for help or recognize that they have a substance problem. Which is why we need alliances with people who can help.

Gentrification is when newcomers erase and displace the history of locals. Gentrification often pushes out people of color. What this means is that people who have already had history in the community so when they are pushed out because the rent is too high for them to keep up with they aren’t able to take care of their families. When people are  kicked out of their homes a lot of them don’t have family to help them so they end up in the streets or shelters. Shelters are not very great all the time. They provide a roof but they dont always provide safety for people who have families. In my interview with Marcos who runs two sites where he serves the homeless community everyday said, “ I honestly believe that different factors in society make there be an imbalance in wealth. Oh absolutely yeah I truly believe that where we are here in the Bay Area and  just having this large technology companies just feel the gentrification not just in San Francisco but now in the east bay so now the homeless community is growing as a result” (Travijo). This quote is explaining how gentrification is starting to affect the Bay Area because of growing companies that wealthy people want to be around. Wich in this case makes it harder for people who have already lived there to compete against people who are newcomers and have more wealth. For my second interview I interviewed a middle aged women who volunteers at food banks and is a counselor for a group typically for young teenagers. During her interview she said, “ Areas that were known as the hood now have people who wouldn’t even look twice or would ever think about living or visiting those areas and it’s unfortunate that those areas have needed help for a long time and now their getting help not the people who lived there are being pushed out so that other people who can afford with more money are able to move in”(Lopes). This interviewee shared her thought on gentrification having to do with why people are homeless today. What I got from the quote was that gentrification has a lot to do with a person’s money status and if there able to keep up with rent and being able to compete with other newcomers.  Gentrification has a lot to do with why people sometimes become homeless.

We should help and make this issue more known because there are families who are living in cars and in the streets and that’s not an environment that anyone should have to face. For solutions in helping this process is we should stand with each other and take one problem down at a time because change doesn’t happen overnight sometimes it can take a really long time until you start to notice changes. The first step of action I believe we should take to end homelessness is having empathy towards people who are having a hard time and not look at them like if they killed someone because they didn’t  they just lost their way and we need to help them get back on track. In order for them to get back on track we need to have back up as in a group for protest because housing inequalities drive people out of their homes. Because drugs is also a cause for homelessness we can have fundraisers to help raise money for people who can’t afford rehabilitation centers. We can also volunteer in food banks or helping hand out food to the homeless or just people who can’t really afford to buy food because their paycheck goes into rent.

In conclusion there are many reasons why people end up being homeless. It can be because of drugs or gentrification, but whatever may be the reason people shouldn’t be left without a home or food. The reasons that I listed in the previous paragraphs like gentrification and drug abuse say that there’s so many reasons to leave a person without a home so instead of letting that happen we should do something about it and help them. Gentrification has a lot to do with the homeless community because people get pushed out of their homes. Drugs also have a huge impact on a person’s living. We should stand together to feed the hungry not the streets.

The interview was about the homelessness community and what are the major causes of why people become homeless. I interviewed a middle aged women who works with a lot of food banks and volunteers to give to the homeless community. I believe that she is trustworthy because she wouldn’t have a necessity to lie it’ll just make her look like she takes advantage of her volunteer position at food banks to look like a nice person.

Substance Abuse and Homelessness. Published by the National Coalition for the Homeless, July 2009, www.nationalhomeless.org/factsheets/addiction.pdf.

This source is trustworthy because in the bottom of the page it lists all of the resources and references that they used. The website has a number and a fax number if you need more evidence. the article has the website listed and it’s a .org and .orgs are always trustworthy. This article talks about how drugs can play a huge role in helping someone become homeless. The article also lists a lot of reasons in how someone can get so addicted that they start losing important features in their life like jobs, family( Etc).

Marcos owns two locations of food banks. During the interview he expressed his feelings of what he thinks about the homeless community. I believe that he is a trustworthy source because his done a lot of work to help that community and has made it aware that people need help to get back on their feet and create a life for themselves. He expressed reasons why he chose to work as an owner of two food banks and volunteers at churches to hand out free food.