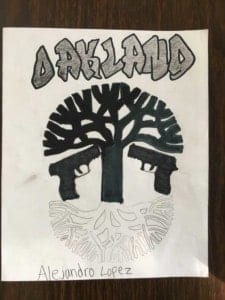 In my project, I decided to do a book jacket and it is going to represent Romeo and Juliet in my world. I was born in Oakland so that’s why I have Oakland as my title. Oakland has a lot of violence and gun shooting and then deaths happen. In my neighborhood, violence and robberies happen most of the time. Also, on November 26, 2017, a homeless guy jumped our fence from my house and stole a number of things. Oakland is the third most violent city. There is a lot of gangs and end up killing each other. Living in Oakland isn’t that bad for me because I’m used to all the violence and gun shots but it is also very dangerous. This violence relates to Romeo and Juliet because in Romeo and Juliet, they fought for their city called Verona. In my project which is a book jacket, I am talking on how two gangs keep fighting and killing each other so one of the gangs can conquer Oakland. In Romeo and Juliet, the two groups were called, “the Montagues” and “the Capulets”. It relates to my life and also represents how I live in the place I was born in and how I have to deal with violence, gangs, and gun violence. Just like Romeo and Juliet, both of the gangs end up not using violence anymore and start minding their own business.