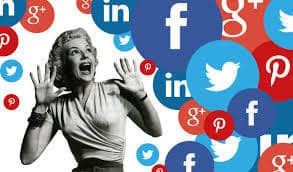 The media is how people keep up with the changing world. There are many parts to the media, and the one that will be discussed is social media, and its effects on this generation. Almost two billion people use any kind of social media. This includes Facebook, Twitter, Pinterest, Snapchat, Instagram, Vine, Linkedin, MySpace, Youtube, Tumblr, and Google+. Although the media is great for keeping everybody connected and up-to-date, I believe that social media has only made humans digress in social abilities and has distracted us from what’s truly important: building real relationships, thinking critically, and dedicating our time to do better things.

The definition of media is the main means of mass communication (especially television, newspapers, radio, and the internet) regarded collectively. Social media is defined as applications and websites that enable users to share and create content or to participate in social networking. Many people just use social media to communicate with friends and family, but then, many people get addicted very fast. In fact, 75% of all the interactions one has on Facebook typically happens in the first 5 hours. That is the point at which they communicate with their friends most; after that, it’s only an addiction that distracts the user. If the point of getting social media is to communicate with friends and relatives, and most of the interaction happens within one day, then it doesn’t seem worth it to become attached to the social media, and only interact with others sometimes.

People lose precious time, because of social media. Facebook users, all together, spend 10.5 billion minutes. That’s equal to almost 20,000 years spent of social media! Facebook isn’t worth that much time, and there are far more productive things that we could be doing. We have the world at our fingertips: we could learn almost anything with the internet, but when online, users are on Facebook 1 out of every 7 minutes. And once social media loses its purpose of connecting friends through the internet, it is only a waste of time.

Along with losing its purpose in hours, and wasting time, social media hurts the social skill development of mostly children and teens. UCLA students did a study on how social media affects sixth graders. The sixth graders who went five days without even looking at any electronic device could read human emotions a lot better than the ones that did go on their smartphones. Patricia Greenfield, a psychology professor UCLA says that,“Many people are looking at the benefits of digital media in education, and not many are looking at the costs.” It’s true; most schools in the US are trying to make schoolwork all digital, and while it does have many benefits, it also has its costs. The more social media that is presented to people, the less social they can become.

It’s not only children and teens, but also adults. Seventy-four percent of adults online use some sort of social media. Mothers with children under the age of five are typically most active on their social networking site. One out of five couples may meet online, but ⅕ of all divorces happen because of social media. I believe that before we start relying on social networks, we must make a cost-benefit analysis of our drive toward technology.

There are solutions to the world’s addiction to social media. We can do what the sixth graders did in the test with UCLA and quit cold turkey. Even if we build up our real relationships and connect with people without the phone, then naturally, we will disconnect with social media. We don’t even need to completely take it away from our lives, if we can limit it to when we aren’t with anyone. Social media becomes a problem when we are ignoring other people or things, but if we can limit to only using it when we have a break, or nothing else to do, then we are still making a huge improvement.

Social media, the applications and websites that enable users to share and create content or to participate in social networking, is what I believe to be distracting and addictive to this generation. There won’t be that much to look back on later in life if we spend countless hours on social media. Technology is great for research, developing new ideas, or making shopping and communicating a bit easier, but it should not be used socially. It only makes humans digress in learning ability and emotional recognition. These are the reasons why I believe that social networks are a negative influence on this generation.