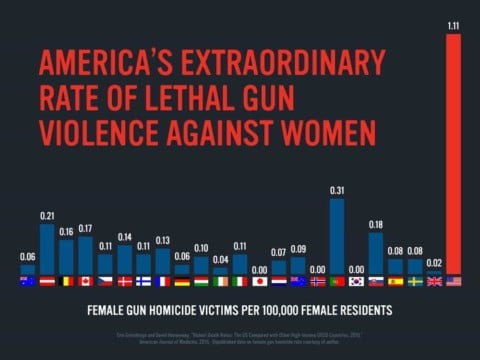 Women are often the victims of domestic abuse by their male romantic partners. Domestic abuse can leave emotional and physical damage and even result in death. When a domestic abuser owns or has access to a gun, the victim is five times more likely to be murdered (The Trace 4). The correlation between firearms and fatal domestic abuse is so convincing that research proves that “simply living in a state with a high rate of firearm ownership increases a woman’s risk of being fatally shot in a domestic violence incident” (The Trace 2). Current laws are put in place to prevent these dangerous men from purchasing and owning guns yet 760 Americans are murdered every year with guns by their spouses, ex-spouses, or intimate partners (The Trace 8).
The current federal law bans convicted stalkers and domestic abusers from purchasing a firearm, however this does not include minor stalking charges or an abuser who was not married to the victim or lived together. In fact, according to the federal law, abuse is only considered domestic violence if “the victim is currently or formerly married to or living with his or her abuser, or if the parties have a child together” which allows an abuser who is the victim’s dating partner to purchase a gun. (The Trace 31) Still, only sixteen states “authorize or require the removal of firearms from subjects of temporary restraining orders” (The Trace 35). This breach in the law is deadly and kills women every year when dangerous people are aware of the loophole and take advantage of it (Everytown 43). The federal law also allows domestic abusers to go around the law and purchase guns from private sellers, which does not require a background check. Thirty-eight percent fewer women are shot to death by a romantic partner in states that require background checks for all handgun sales (Everytown 7).
The loophole that allows dating partners convicted of domestic violence to purchase guns is deadly. Every year dating partners kill more women than husbands do (Everytown 37). These intimate partners who are abusers are responsible for a large amount of mass shootings. Even if a boyfriend is convicted of domestic assault, and the two partners did not live together or have a child together, he would be able to pass a background check and purchase a firearm. If a girlfriend of an abuser took out a restraining order against the boyfriend, even if the man is identified as a threat to her safety, the abuser would still be legally allowed to buy a gun (Everytown 39). This “Boyfriend Loophole” is dangerous and needs to be closed.
65% of Americans support banning people who have been issued a restraining order or convicted of stalking from owning a gun, yet congress has not done so. To attack this problem head on, Congress should close the loopholes to prohibit any person convicted of domestic abuse or stalking. On a state level, laws should be strengthened to require background checks on all gun sales and to prohibit the possession of a gun by persons subject to a restraining order. Congress should pass the Public Safety and Second Amendment Rights Protection Act which requires background checks for all gun sales (Everytown 55).