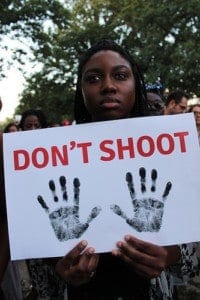 Police brutality is getting out of control like we as black people already face a lot of racism, but we shouldn’t be afraid or fear the people that’s suppose to protect us. They also tend to charge black people more time and harsher punishments than a white person that committed the same crime. They even go as far as to stop someone while they’re walking. A lot of people have been pulled over and arrested for resisting arrest and that be their only charge so that means they didn’t do anything wrong to begin with. “The Ferguson investigation reports that every defendant charged solely with resisting arrest was black and that 92% of all resisting arrest charges were made against black people” (resisting arrest is not a crime).

Police brutality and blacks being treated different has caused a lot of protesting. A major one is kneeling against the national anthem. Many NFL players has started kneeling due to the way we are being treated. Colin Kaepernick said “I am not going to stand up to show pride to a flag for a country that oppresses black people, and the people of color” (Taking a knee). He also said “To me, this is bigger than football, and it would be selfish on my part to look the other way. There are bodies in the street, and people getting paid leave, and getting away with murder” (Taking a knee), and he is right the police are getting away with murder and thinking it’s okay.

We need to punish the police. They need to be fired and sent to prison. They are killing innocent people and getting away with thinking they seen a gun or they felt threatened. It’s not fair to the people who are being killed, and not fair to the families they need justice. The police need punishments.