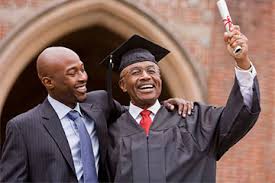 Opportunity. This is the word that makes someone an American. Americans are born with the opportunity to succeed in life no matter where they are born, what color their skin is, how much money their parents make, or their social class. A kid born in a poor neighborhood filled with drugs and crime has the same opportunity to succeed in life as a kid born into a nice neighborhood with wealthy parents. Both kids are able to dream big and chase after those dreams. It may be a little harder for the kid in the rough neighborhood but if he/she has the determination to succeed and if they put in the required work, they have the opportunity to succeed. The thing about today’s America is that some people don’t believe they have opportunity. If they are born into a rough neighborhood, kids today will likely turn to drugs and crime and not make it very far in life. It’s very sad but it is becoming more and more apparent in American culture. We need to educate our kids to show them that they do in fact have the opportunity to do what they want with their lives. The article http://www.heritage.org/marriage-and-family/commentary/america-though-challenged-still-the-land-opportunity by Jim DeMint was written in 2014 but I believe it is still relavent today. Mr. DeMint talks about his childhood and opportunity in America. His family struggled economically during his childhood but he was able to persevere. He talks about the importance of hard work and how it is connected to opportunity. Opportunity does no good if you don’t work hard and do something with the opportunity. We all have equal opportunity but only those who work hard get rewarded. This is a prevalent topic in Mr. Demint’s article and it is also a powerful one.

There are a lot more articles that talk about hard work leading to success but one in particular stood out to me at https://www.the-american-interest.com/2014/11/08/in-america-hard-work-still-equals-success/. The article In America, Hard Work Still Equals Success, the author talks about how a higher percentage of Americans believe hard work will lead to success instead of other factors like luck. It also talks about what other countries value and this is where it got interesting. About 10% of Italians that took the survey believed “giving bribes” is important to getting ahead in life. Other countries like Russia and Palestine had similar responses. Americans don’t need corruption to help us get ahead because we value hard work and we are determined to succeed. Perfect examples of hard working Americans are  Drs. Sampson Davis, Rameck Hunt, and George Jenkins. The three wrote the book The Pact and I found it to be very motivational and educational. It highlighted the American values of opportunity and overcoming adversity. Rameck, George, and Sampson were born in a rough New Jersey neighborhood that was filled with crime, drugs, and death. Many of their friends dropped out of high school and joined gangs which was most likely where they were headed if they had not made a pact. They agreed to stick together and encourage each other to stay in school and become doctors. They faced a lot of challenges throughout their childhoods and allowed temptation to get the best of them at times. They got into some trouble with crimes and drinking in high school but they were able to turn their lives around and get back on track. We need more kids like Rameck, Sam, and George in today’s America because we are all blessed to have the opportunities that most countries do not have. What do you think we as Americans can do to educate our youth to motivate them and give them the determination that Rameck, George, and Sam had growing up? What do you think our American values are?

Opportunity in American Society by Nick is licensed under a Creative Commons Attribution-ShareAlike 4.0 International License.