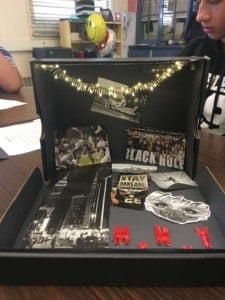 When people see me, they see a female that’s weak and that’s only good for serving men. They see a Mexican who robs and is illegal. When people see me, they see that I’m a gang member because I’m from Oakland. But these are just dominant narratives of my life, you see I’m a female but that doesn’t mean I’m weak. I’m a Latina that’s from Oakland but that doesn’t mean I’m violent or illegal. In my box I put a picture of a woman with a cape that’s standing over a tall mountain because who run the world? Yup girls run the world as Beyonce said. I am a proud female that won’t let anyone tell them what to do or how to do it (unless it’s my madre because she’ll whoop me). I put a picture of a female that has the word Latina over her forehead and a rose over her mouth because as a female, you kind of learn to deal with stereotypes but that rose over her mouth means beauty, independent and fierce. The pictures of Oakland and the Oakland Raiders are a mix of my passion for sports, where I’m from and who I am (a huge Raider fan that’s not ashamed of saying she’s from Oakland). Finally, the white lights hanging above the box bring the theme of black and white together. The lights represent me because I am the light that can brighten your day anytime but I can easily “switch” and be the darkest part of your day.